Goldy asks Dean: "Is the public option a “slippery slope” to single-payer?" (with audio) 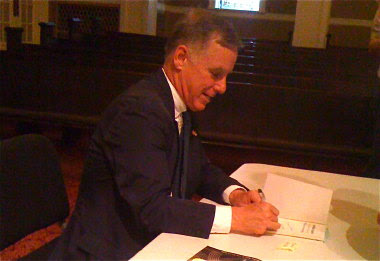 It was hot last night at Seattle’s Town Hall, both literally and figuratively. Outside, advocates of a single-payer healthcare system were chanting and leafleting. Inside, as Gov. Howard Dean spoke about healthcare reform, the crowd was only slightly less boisterous.
Though friendly and receptive as Gov. Dean took the podium, when it came time to take questions from the audience it quickly became apparent that the many of those inside shared the sentiments of those on the street, with some of the questioners filibustering their opportunity at the mic to take an uncompromising stance in favor of single-payer, and opposed to anything less. It was apparently a familiar scene for Gov. Dean, who had just arrived from a similar engagement in Portland, OR, where several single-payer advocates had to be removed from the audience after disrupting the proceedings.

Gov. Dean, a licensed physician and former presidential candidate and DNC Chair, is on tour promoting his new book “Prescription for Real Healthcare Reform,” but for many true believers, Gov. Dean’s prescription—take a public option and call me in a decade—isn’t real enough. What plays out is the sorta classic confrontation between idealism and pragmatism that so often undermines reforms coming from either end of the ideological spectrum, leaving those in the mushy middle so firmly in control. And it’s the kinda confrontation that the insurance industry and big pharma are counting on to stave off reform for another generation.

As Gov. Dean repeated throughout the Q&A, he’d personally prefer a single-payer system, as it’s the only reform that can guarantee universal coverage while quickly providing the level of savings needed to get our healthcare costs under control. But as he also repeated, polling consistently shows that the general public just isn’t there yet, let alone the laggards in Congress, so while single-payer shouldn’t necessarily be taken off the table, it would be unrealistic to expect it to move any further… at this point in time.

And here’s where that confrontation between idealism and pragmatism really comes into play. Public option opponents on the left dismiss the proposal as mere half-measures, while public option opponents on the right attack it as a slippery slope to single-payer. And they’re both right. The question is, will the lack of enthusiasm for the public option from idealists on the left ultimately play into the hands of the pragmatists on the right in their efforts to scuttle any substantive reforms at all?

As I’ve argued before, the public option is a slippery slope to single-payer, if implemented and executed correctly. Now some might characterize this admission as cynical and dishonest, but good policy done right is inherently a slippery slope toward better policy. As it should be. And it’s a slope we slide down only with the approval of a majority of voters.

So after he finished signing books I asked Gov. Dean whether he believed the public option would be a slippery slope to single-payer. I wanted him to say yes, and I sensed that he wanted to say yes as well. But he’s too smart for that… and too pragmatic. Instead, he enunciated what I think is the most rhetorically effective response I’ve ever heard to the right’s slippery slope argument, a response that totally undermines their objection, even without denying it:

That’s what this bill is about. This bill is not about whether to have a single-payer or a public option or a private system; this bill is about whether the American people get to choose for themselves, or whether congressmen take it upon themselves to override the will of the American people and do something different. It’s a straight up vote between whether you’re in favor of the health insurance industry, or whether you’re in favor of your constituency. Everybody’s going to have to make that vote, and we’ll be watching.

The same could be said to the uncompromising advocates of a single-payer system.

I may not live to see the bottom, but I still believe that the public option will ultimately set us down that slippery slope to single-payer, and my sense is that many of its proponents believe the same, whether for pragmatic reasons, they’re willing to publicly say so or not. If given the choice, many Americans will flock to the public option, and if private insurers simply aren’t able to compete, I’m alright with that.

Of course, there isn’t. And if the single-payer advocates can be as patient as they are passionate, I’m confident the American people will ultimately prove them right.

Howie P.S.: Dean's short answer can be translated to "yes" if that's what the population wants. As Howard Dean's Unofficial #1 Fan in Seattle, I feel guilty for not going Friday night. But Goldy has given us a great report.
Posted by Howard Martin at 8:03 AM