Seattle Times: "Vote Nickels or Mallahan on your mail-in ballot." 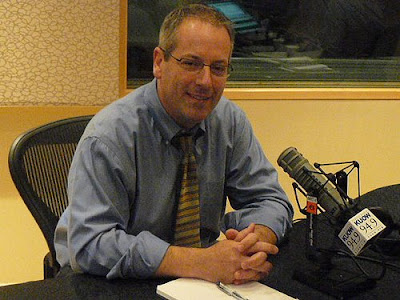 AT a time when the incumbent Seattle mayor needs a strong challenger to test his mettle and hold him accountable, candidates opposing him lack the depth, presence or proven political skills to readily defeat him.
Seattle voters, therefore, are left with a more limited mayoral contest than they deserve. For the primary, voters should back Greg Nickels — yes, even with legitimate concerns about his handling of the transportation department — and Joe Mallahan, a T-mobile executive yet to demonstrate why he should hold the city's top job.

If this sounds like damning with faint praise, there is some of that. Both should advance to the general election and both have a pile of work to do.

Nickels has served almost eight years. For many of those years, the city ran smoothly. Potholes were filled. The mayor enhanced the business climate in certain neighborhoods. Civic order, for the most part, was maintained until last year's snow storms.

That's when Nickels and transportation director Grace Crunican not only botched the city response, they revealed a disconnect with businesses and citizens during a busy holiday season.

Nickels can be a bully and a nanny at the same time. He wants citizens to do certain things but doesn't seem able to use the bully pulpit to coax and cajole them toward his goals.

But Nickels also has a record of accomplishment, of leading, of getting things done.

He has demonstrated the skills to focus on a project and see it through, even if Seattleites don't agree with the method, style or substance of certain efforts. For example, the mayor pushed hard — too hard — in 2007 for an expensive cut-and-cover tunnel to replace the Alaskan Way Viaduct and open up the Seattle waterfront. The vision was laudable, the price tag overwhelming, the disruption to downtown unacceptable.

As time went on, Nickels took a different tack. A stakeholders group was formed. Seattle process reigned. In the end, the mayor, King County executive and governor agreed to meet capacity requirements with surface and transit improvements mixed with a different tunnel — a deep-bore tunnel that creates far less disruption during construction.

This editorial page did not support Sound Transit light rail, but Nickels demonstrated an ability to keep his eye on the prize for many years. The system is up and running and becoming part of the city's transportation mix.

Nickels is also the new president of the U.S. Conference of Mayors, respected nationwide for his work on the greening of urban America.

Mallahan is the candidate voters are trying to like for want of an alternative. He is increasingly the answer to the question, "If not Nickels, who?"

As a manager at T-Mobile, Mallahan developed compelling leadership qualities. Mallahan has a spotty voting record and limited public-sector experience. While in college he worked for a Bellingham congressman and subsequently as a community organizer in Chicago.

Those experiences, however, are not sufficient for him to climb the mountain from intriguing candidate to the city's top job. Still, it is worth having Mallahan challenge the mayor in the coming months to see what shakes out.

Both candidates should offer thoughtful ways to diminish the presence of street toughs who all but own parts of Lower Queen Anne and Pioneer Square. Streets have not become friendlier under Nickels.

City finances fared better during the recession than those of the county or the state. Voters would blame Nickels if it were not true, so he gets some credit because it is true.

Other candidates — including James Donaldson, Mike McGinn and Jan Drago — are commended for jumping into the race with full vigor. All are better suited to the council.

Nickels is a competent leader with significant flaws seeking an unusual third term. He should tone down the aggressiveness in approach and find new ways to accomplish things.
Mallahan should tell us more, or better yet, show us how he can make the significant leap from competent businessman to mayor of the state's largest city.

Vote Nickels or Mallahan on your mail-in ballot.

Howie P.S.: I agree with this 50%, which is much higher than usual for me with this particular publication.
Posted by Howard Martin at 3:43 PM

Is more CHANGE on the way?