Health care: Obama and "the deal" 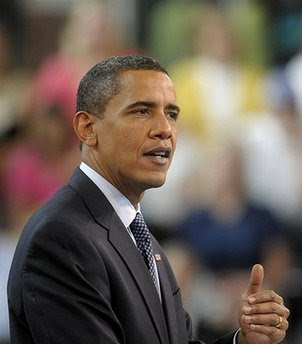 After weeks of fractious debate that threatened to derail President Barack Obama's health care campaign, House Democrats reached a critical but fragile agreement Wednesday that appeared to pave the way for the chamber to vote on an overhaul in September.
The deal, worked out between a set of fiscally conservative Democrats and Rep. Henry Waxman, D-Calif., chairman of the Energy and Commerce Committee, changes the way a proposed government-operated insurance plan would operate to allay concerns that it could crowd out private insurers.

Brokered with help from the White House, the deal also cuts more than $100 billion from the bill's price tag of more than $1 trillion, according to lawmakers who worked on the pact. And it would exclude more small businesses from a new requirement to provide employees with health insurance.

Democrats on Capitol Hill still face big obstacles in their quest to send Obama the legislation. Those include mollifying liberal lawmakers, who expressed outrage at the deal reached Wednesday.

But the agreement comes at a critical time for the president and his congressional allies.

The fiscally conservative Democrats, known as Blue Dogs, had blocked progress on the legislation in Waxman's committee for more than a week, threatening to leave House discussions in disarray as lawmakers prepared to leave town for their August recess. With an important Senate committee still mired in difficult negotiations on its own bill, momentum on the health care overhaul threatened to stall.

The agreement delays a vote by the full House on the legislation until September, satisfying another demand of many moderate Democratic lawmakers, who wanted time to absorb the details of the complex legislation.

Obama praised the progress Wednesday and called the work of the fiscally conservative Democrats "extraordinarily constructive in strengthening this legislation and bringing down its cost."

The president did not endorse the specifics of the agreement. He is expected to play a role in writing a version of the Senate bill next month.

It appears likely that there will be much more debate about crucial issues at the heart of Wednesday's agreement. One is whether the government should offer its own insurance plan, competing with private insurers.

Under the agreement, House Democrats retained the idea of creating a new government insurance program, a core piece of the party's health care agenda.

But the deal takes steps to ensure that the government plan would not gain competitive advantages over private insurance plans from the federal management of Medicare, the insurance program for seniors that can negotiate low rates for services because of its enormous size.
More-liberal House members protested. Rep. Patrick Kennedy, D-R.I., said the deal "lets insurance companies off the hook" for savings they had already promised the White House they would accomplish.

Howie P.S.: Other Congressional Democrats are now pushing back against "the deal." The NY Times covers Obama's "mini-campaign trip" to Virginia and North Carolina on Wednesday for his health care reform plan.

Barack Obama
Posted by Howard Martin at 4:11 AM