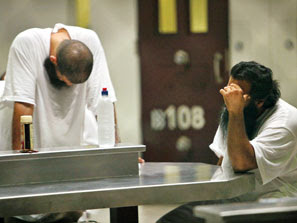 Writer for The Nation and Politico comes on TYT to discuss how radical and dangerous Obama's new indefinite detention policy is. Is his policy worse than Bush's and worse than what currently exists at Gitmo?

Howie P.S.: This is a smart discussion of the legal and political issues involved in what to do with Gitmo prisoners. Ari and Cenk are discussing the issues raised in Melber's story in Politico, "Prevention is not always the best medicine.".

Barack Obama
Posted by Howard Martin at 6:13 AM