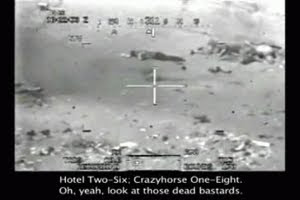 A United States military video was released this week showing the indiscriminate targeting and killing of civilians in Baghdad. The nonprofit news organization WikiLeaks obtained the video and made it available on the Internet. The video was made July 12, 2007, by a U.S. military Apache helicopter gunship, and includes audio of military radio transmissions.
Two Reuters employees—a journalist and his driver—were killed in the attack, along with at least eight other people, and two children were injured. The radio transmissions show not only the utter callousness of the soldiers, laughing and swearing as they kill, but also the strict procedure they follow, ensuring that all of their attacks are clearly authorized by their chain of command. The leaked video is a grim depiction of how routine the killing of civilians has become, and is a stark reminder of how necessary journalism is, and how dangerous its practice has become.

After photographer Namir Noor-Eldeen, 22, and his driver, Saeed Chmagh, 40, were killed, Reuters demanded a full investigation. Noor-Eldeen, despite his youth, had been described by colleagues as one of the pre-eminent war photographers in Iraq. Chmagh was a father of four.

The video shows a group of men in an open square in Baghdad, leading the two Reuters employees to a building nearby. Noor-Eldeen and Chmagh are shown, each carrying a camera with a telephoto lens. A U.S. soldier in the helicopter says: “OK, we got a target 15 coming at you. It’s a guy with a weapon.” There is much back and forth between two helicopters and ground troops in armored vehicles nearby:

“Have five to six individuals with AK-47s. Request permission to engage.”

Advertisement
“Roger that. Uh, we have no personnel east of our position. So, uh, you are free to engage. Over.”

The helicopter circles around, with the cross hairs squarely in the center of the group of about eight men. WikiLeaks and its partner for this story, the Icelandic National Broadcasting Service, added subtitles to the video, as well as arrows indicating the Reuters employees.

Sustained automatic-weapon fire erupts, and most of the men are killed instantly. Noor-Eldeen runs away, and the cross hairs follow him, shooting nonstop, until he falls, dead.

The radio transmission continues, “All right, hahaha, I hit ’em ...” and then, “Yeah, we got one guy crawling around down there. ...”

Chmagh, seriously wounded, was dragging himself away from the other bodies. A voice in the helicopter, seeking a rationale to shoot, said: “Come on, buddy. All you gotta do is pick up a weapon. ... If we see a weapon, we’re gonna engage.”

A van pulled up, and several men, clearly unarmed, came out and lifted Chmagh, ostensibly to carry him to medical care. The soldiers on the Apache sought and received permission to “engage” the van and opened fire, tearing apart the front of the van and killing the men. The weapon used was a 30-millimeter machine gun, used to pierce armor. With everyone in sight apparently dead, U.S. armored vehicles moved in. When a vehicle drove over Noor-Eldeen’s corpse, an observer in the helicopter said, laughing, “I think they just drove over a body.” The troops discovered two children in the van, who had miraculously survived. One voice on the military radio requests permission to evacuate them to a U.S. military hospital. Another voice commands them to hand over the wounded children to Iraqi police for delivery to a local clinic, ensuring delayed and less-adequate treatment.

The U.S. military inquiry into the killings cleared the soldiers of any wrongdoing, and Reuters’ Freedom of Information requests for the video were denied. Despite the Pentagon’s whitewash, the attack was brutal and might have involved a war crime, since those removing the wounded are protected by the Geneva Conventions. WikiLeaks says it obtained the video “from a number of military whistle-blowers.” Wikileaks.org, founded in late 2006 as a secure site for whistle-blowers to safely release documents, has come under attack from the U.S. and other governments.
WikiLeaks has broken numerous stories and has received awards. It and members of the Icelandic Parliament are working together to make Iceland a world center of investigative journalism, putting solid free speech and privacy protections into law. The words of legendary journalist I.F. Stone still hold true: “Governments lie.” Because of that, we need courageous journalists and media workers, like Namir Noor-Eldeen and Saeed Chmagh, and we need whistle-blowers and news organizations that will carefully protect whistle-blowers’ identities while bringing their exposés to public scrutiny.

When a nonprofit group this week released video footage, leaked via a source in the Pentagon, showing a 2007 U.S. helicopter attack on a group of civilians in Baghdad, the clip unleashed a viral online sensation and ignited an intense debate about the conduct of U.S. forces in Iraq.

But the simple fact of the video's release also reflects the ongoing revolution in how news gets produced and published.
The group, called WikiLeaks, released the Pentagon video on Monday. Less than 24 hours later, the clip had netted more than 1.3 million viewers on YouTube alone.

The transmission of information, in and out of regularly authorized channels, has become much more immediate — and far more viral — than at any point in history. Virtually anyone with a browser and a DSL connection can now bring news to light in dramatic and instantaneous fashion. All these trends converged with the WikiLeaks video.

Seven noncombatants were killed in the Baghdad attack — among them a driver (Saeed Chmagh) and photographer (Namir Noor-Eldeen) employed by the Reuters news service. Reuters, indeed, had been seeking to obtain internal Pentagon materials pertaining to the attack — including the footage that went online yesterday — for the past three years, using the Freedom of Information Act. The agency's efforts had so far proved fruitless.

And that's where WikiLeaks came in. The nonprofit website launched in 2006 as an online clearinghouse for whistleblowers seeking to publicize leaked government documents across the world. But prior to posting the video footage, the site had functioned as repository of information; with this latest scoop, which it says came from "a courageous source" within the U.S. military, it has morphed into an investigative news source in its own right. (The full 18-minute video can be viewed — albeit with the clear warning that the material is quite disturbing — at the special project URL that WikiLeaks established for it, under the incendiary name of collateralmurder.com.)

"The material was encrypted with a code, and we broke the code," WikiLeaks founder Julian Assange told wired.com. "In terms of journalism efficiency, I think we discovered a lot with a small amount of resources."

But this was much more than a question of cracking an encryption code from a renegade PC. WikiLeaks also reported the story the old-fashioned way — by sending two reporters to Baghdad to research the 2007 incident. The group says its correspondents verified the story by interviewing witnesses and family members of people killed and injured in the attack. These accounts helped to flesh out the gaps in the official account of the incident; as the materials at CollateralMurder.com explain, the "military did not reveal how the Reuters staff were killed, and stated that they did not know how the children were injured." And now that silence is starting to abate: In response to the release of the WikiLeaks video, the Pentagon has circulated some documents relating to the incident, and MSNBC reported this morning that American soldiers mistook a camera held by one of the fallen journalists for a weapon.

Still, the release of the video has also drawn criticism — not so much for the broader WikiLeaks mission of promoting government transparency, but for the site's failure to supply a fuller context to help viewers better understand what they're seeing. A former helicopter pilot and photographer named A.J. Martinez, for example, has dissected the footage on his blog, and attacked the site's packaging of the footage as misleading — and making it seem like the Apache unit was acting out of cold-blooded malice rather than genuine confusion about a possible ground attack taking shape below. "There are many veterans with thousands of hours experience in both analyzing aerial video and understanding the oft-garbled radio transmissions between units," he writes, adding that it would not be unreasonable for the WikiLeaks staff to solicit such interpretive input for concerned vets. "Promoting truth with gross errors is just as shameful as unnecessary engagement" on the field of battle, Martinez concludes.

Yahoo! News contacted Reuters for comment, and a Reuters spokeswoman directed us to their story on the episode, in addition to providing us with the following statement:

"The deaths of Namir Noor-Eldeen and Saeed Chmagh three years ago were tragic and emblematic of the extreme dangers that exist in covering war zones. We continue to work for journalist safety and call on all involved parties to recognise the important work that journalists do and the extreme danger that photographers and video journalists face in particular," said David Schlesinger, editor-in-chief of Reuters news. "The video released today via WikiLeaks is graphic evidence of the dangers involved in war journalism and the tragedies that can result."

Meanwhile, WikiLeaks appears to be far from done. The group is openly soliciting donations to defray the expenses involved in the upcoming release of another video that allegedly documents other civilian deaths at the hands of the U.S. military, this time in Afghanistan.
(Update: Greg Sargent, at the Washington Post's Plumline, reports that the Pentagon is preparing to issue an official response in the wake of the leaked video, perhaps as early as today.)