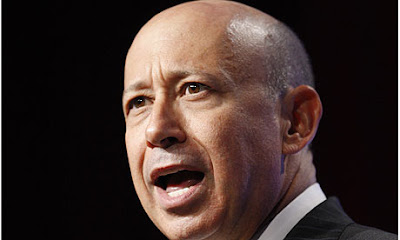 So Goldman Sachs, the world's greatest and smuggest investment bank, has been sued for fraud by the American Securities and Exchange Commission. Legally, the case hangs on a technicality.

Morally, however, the Goldman Sachs case may turn into a final referendum on the greed-is-good ethos that conquered America sometime in the 80s – and in the years since has aped other horrifying American trends such as boybands and reality shows in spreading across the western world like a venereal disease.

When Britain and other countries were engulfed in the flood of defaults and derivative losses that emerged from the collapse of the American housing bubble two years ago, few people understood that the crash had its roots in the lunatic greed-centered objectivist religion, fostered back in the 50s and 60s by ponderous emigre novelist Ayn Rand.

While, outside of America, Russian-born Rand is probably best known for being the unfunniest person western civilisation has seen since maybe Goebbels or Jack the Ripper (63 out of 100 colobus monkeys recently forced to read Atlas Shrugged in a laboratory setting died of boredom-induced aneurysms), in America Rand is upheld as an intellectual giant of limitless wisdom. Here in the States, her ideas are roundly worshipped even by people who've never read her books oreven heard of her. The rightwing "Tea Party" movement is just one example of an entire demographic that has been inspired to mass protest by Rand without even knowing it.

Last summer I wrote a brutally negative article about Goldman Sachs for Rolling Stone magazine (I called the bank a "great vampire squid wrapped around the face of humanity") that unexpectedly sparked a heated national debate. On one side of the debate were people like me, who believed that Goldman is little better than a criminal enterprise that earns its billions by bilking the market, the government, and even its own clients in a bewildering variety of complex financial scams.

On the other side of the debate were the people who argued Goldman wasn't guilty of anything except being "too smart" and really, really good at making money. This side of the argument was based almost entirely on the Randian belief system, under which the leaders of Goldman Sachs appear not as the cheap swindlers they look like to me, but idealised heroes, the saviours of society.

In the Randian ethos, called objectivism, the only real morality is self-interest, and society is divided into groups who are efficiently self-interested (ie, the rich) and the "parasites" and "moochers" who wish to take their earnings through taxes, which are an unjust use of force in Randian politics. Rand believed government had virtually no natural role in society. She conceded that police were necessary, but was such a fervent believer in laissez-faire capitalism she refused to accept any need for economic regulation – which is a fancy way of saying we only need law enforcement for unsophisticated criminals.

Rand's fingerprints are all over the recent Goldman story. The case in question involves a hedge fund financier, John Paulson, who went to Goldman with the idea of a synthetic derivative package pegged to risky American mortgages, for use in betting against the mortgage market. Paulson would short the package, called Abacus, and Goldman would then sell the deal to suckers who would be told it was a good bet for a long investment. The SEC's contention is that Goldman committed a crime – a "failure to disclose" – when they failed to tell the suckers about the role played by the vulture betting against them on the other side of the deal.

Now, the instruments in question in this deal – collateralised debt obligations and credit default swaps – fall into the category of derivatives, which are virtually unregulated in the US thanks in large part to the effort of gremlinish former Federal Reserve chairman Alan Greenspan, who as a young man was close to Rand and remained a staunch Randian his whole life. In the late 90s, Greenspan lobbied hard for the passage of a law that came to be called the Commodity Futures Modernisation Act of 2000, a monster of a bill that among other things deregulated the sort of interest-rate swaps Goldman used in its now-infamous dealings with Greece.

Both the Paulson deal and the Greece deal were examples of Goldman making millions by bending over their own business partners. In the Paulson deal the suckers were European banks such as ABN-Amro and IKB, which were never told that the stuff Goldman was cheerfully selling to them was, in effect, designed to implode; in the Greece deal, Goldman hilariously used exotic swaps to help the country mask its financial problems, then turned right around and bet against the country by shorting Greece's debt.

Now here's the really weird thing. Confronted with the evidence of public outrage over these deals, the leaders of Goldman will often appear to be genuinely confused, scratching their heads and staring quizzically into the camera like they don't know what you're upset about. It's not an act. There have been a lot of greedy financiers and banks in history, but what makes Goldman stand out is its truly bizarre cultist/religious belief in the rightness of what it does.

The point was driven home in England last year, when Goldman's international adviser, sounding exactly like a character in Atlas Shrugged, told an audience at St Paul's Cathedral that "The injunction of Jesus to love others as ourselves is an endorsement of self-interest". A few weeks later, Goldman CEO Lloyd Blankfein told the Times that he was doing "God's work".

Even if he stands to make a buck at it, even your average used-car salesman won't sell some working father a car with wobbly brakes, then buy life insurance policies on that customer and his kids. But this is done almost as a matter of routine in the financial services industry, where the attitude after the inevitable pileup would be that that family was dumb for getting into the car in the first place. Caveat emptor, dude!

People have to understand this Randian mindset is now ingrained in the American character. You have to live here to see it. There's a hatred toward "moochers" and "parasites" – the Tea Party movement, which is mainly a bunch of pissed off suburban white people whining about minorities consuming social services, describes the battle as being between "water-carriers" and "water-drinkers". And regulation of any kind is deeply resisted, even after a disaster as sweeping as the 2008 crash.

This debate is going to be crystallised in the Goldman case. Much of America is going to reflexively insist that Goldman's only crime was being smarter and better at making money than IKB and ABN-Amro, and that the intrusive, meddling government (in the American narrative, always the bad guy!) should get off Goldman's Armani-clad back. Another side is going to argue that Goldman winning this case would be a rebuke to the whole idea of civilisation – which, after all, is really just a collective decision by all of us not to screw each other over even when we can. It's an important moment in the history of modern global capitalism: whether or not to move forward into a world of greed without limits.

Posted by Howard Martin at 6:23 AM