Drilling for "Defense"--Same as the Other One 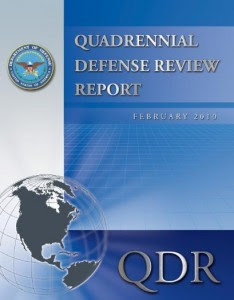 Perhaps the drilling decision announced Wednesday also looks so much like Bush administration policy continuation because it’s the same Defense Department — quite literally, the same Defense Secretary at the helm — loaded with left-behinds from the previous administration, which concluded in its QDR that energy security would continue to be a problem for the foreseeable future.

Lacking a truly independent review panel which sees continued expansion of oil production as a risk to our country rather than a benefit to its "sponsors", there’s little chance that our nation’s security strategy and consequently the DOD will change over the rest of Obama’s term in office, or that pressure by the military industrial complex to "drill, baby, drill" will ease any time soon.

Howie P.S.: Obama in NC right now saying alternative energy is one of his highest priorities, but in short term, oil will dominate, hence need for offshore drilling (LIVE video).
Posted by Howard Martin at 7:29 AM