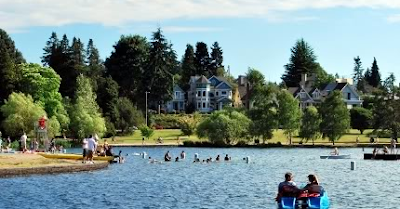 Author’s note: A few weeks ago I mentioned Seattle’s often unknown history of neighborhood segregation in one of my articles, which was read by the editor of My Greenlake. She asked if I would write a guest post outlining how Greenlake was affected, and I agreed; so here it is…

Many who live in Seattle, Washington -and those who view it from afar- do not think racism and discrimination are issues that minorities have ever been faced with here, yet history proves otherwise; issues of race and discrimination in Seattle are as old as Seattle itself.

My interest in Seattle’s segregated past goes much deeper than a passing glance. My grandparents were subject to the rules of segregation in every aspect of their lives including where they worked, lived, shopped and so on. They’ve been around long enough to remember a city that did everything but celebrate or encourage diversity.

My grandfather, Robert Terry, born 1926, Pine Bluff Arkansas, came to Seattle after Seattle schools offered him a position, making him the first Black male teacher in the state. His wife Francis decided she wanted to attend Seattle University. She ran into challenges when she enrolled in the nursing program, because nursing students had to live in the nurse’s dorm; Blacks were not allowed.

The compromise? A private room.

“When I graduated they advertised it in the newspapers and on the radio, almost any radio station around, I was the first to graduate from the school of nursing, I didn’t want the publicity, I felt like they should have been graduating people in 1930, why did they wait until 1951 to graduate a Black person? I didn’t feel I deserved it, it was just something that I did, and people do it every day,” she told me.

They settled in the Central District with their five children. They say it was impossible to find a decent house outside of the dilapidated areas of town.

“Sometimes we didn’t even make it inside the houses; they saw us and flipped the sign. They had gentlemen’s agreements,” says grandma Francis of local, White home and land owners.

“There were neighborhood agreements all over Seattle; you knew what neighborhood you had no chance of living in, it didn’t matter if you were Black, Asian, Hispanic, most all of the neighborhoods that were majority White, openly kept out anyone else,” says my grandfather.

Greenlake was one of those neighborhoods. Today it is loved for its family friendly community- and of course that famous, beautiful lake which draws an untold number of visitors each year, it is absolutely one of the best places in Seattle for walking, playing with the kids, getting in on a pickup basket ball game, or just people watching. Greenlake has a very distinct vibe you can’t get anywhere else; it’s a fun place to be that attracts people of all ages, races and walks of life.

And yet it used to be segregated. It was one of the many places people like my grandparents heard of, but never dreamed of seeing because it simply wasn’t allowed.

Howie P.S.: Please read the whole thing. Does anybody else even write about this?
Posted by Howard Martin at 1:20 AM