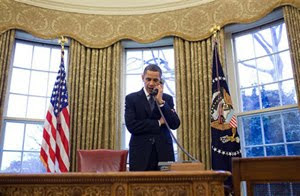 President Barack Obama discusses the START treaty during a phone call with Russian President Dmitry Medvedev on March 26, 2010, in the Oval Office of the White House in Washington.

At last, a believable sighting of that peace president many of us thought we had elected. Give Barack Obama credit, big time, for the startling progress he has made in tempering the threat of nuclear annihilation.
The Obama administration’s Nuclear Posture Review Report for the first time prohibits “first use” of nuclear weapons against nations complying with the nonproliferation treaty. It also pledges a halt to U.S. efforts to modernize such weapons, as had been proposed by then-President George W. Bush in his call for new nuclear “bunker busters.”

Whereas his predecessor succeeded only in eliminating the nonexistent Iraqi nukes, this president has forged a treaty with the Russians that will reduce the world’s supply of the devil’s weapons by one-third. But it was essential to follow that up with a clear departure from the always-insane policy that the U.S. has a right to develop and use such weapons as conventional tools of war.

That is the right that Harry Truman acted on in perpetrating the most atrocious act of terrorism in world history when he annihilated the civilian populations of Hiroshima and Nagasaki. That is what spawned the nuclear arms race that so troubles us today, especially regarding North Korea and Iran.

Yet until Tuesday no American president had renounced the immoral claim that our nation had some God-granted right to use those weapons again. While we consistently insisted it was morally repugnant for any other state to follow in our footsteps, we continued to build ever deadlier versions of these intrinsically heinous weapons.

But that madness ended when Obama on Tuesday affirmed an all-important distinction that Bush, more than any other president, had insisted on blurring—the distinction between nuclear and all other weapons, including the chemical and biological varieties. Lumping them together as weapons of mass destruction denies the global life-ending threat that nukes alone present.

Ironically, the most important section of Obama’s strategy statement, instantly attacked by his knee-jerk critics, could help fulfill the penultimate goal of Ronald Reagan. Because of Obama’s declaration that the “United States will not develop new nuclear warheads ... or provide for new [nuclear] military capabilities” there is now a plausible case to be made for anti-missile defense. Reagan always insisted that his Strategic Defense Initiative program was a means toward nuclear arms cuts and ultimately the abolition of these horrific implements of mass death. But SDI could be properly criticized as a cover for aggression unless we cut the arsenals as opposed to refining and expanding them.

In his historic meeting with then-Soviet leader Mikhail Gorbachev, Reagan embraced the goal of eliminating all nuclear weapons—just as Obama did in his April 2009 speech in Prague. It is a position that commends itself to all who honestly confront the threat these weapons pose to human existence. We have indulged the luxury of not confronting that ultimate horror because of the time that has passed since the explosion of those now relatively small nuclear bombs over Japan. As Henry Kissinger puts it in the documentary “Nuclear Tipping Point,” which was screened at the White House on Tuesday night: “Once nuclear weapons are used, we will be driven to take global measures to prevent it. Why don’t we do it now?”

The answer is that we have become inured to the danger and lulled into accepting these weapons as usable implements of war, an attitude reflected in Tuesday’s reaction by Arizona Republican Sens. Jon Kyle and John McCain, who in a joint statement denounced Obama’s policy as limiting the nuclear “option.” They repeated the old canard that nuclear weapons are a legitimate choice in response to a non-nuclear threat.

That will be the line of those who oppose the Senate’s ratification of the new START agreement with Russia and the long-overdue passage of the Comprehensive Test Ban Treaty. If they win in that debate there is no serious possibility of progress in preventing the further proliferation of nuclear weapons and breaking the death wish of those who still toy with the idea that such weapons are legitimate. Those in the peace movement who think Obama should have gone further in his efforts to put the nuke genie back in the bottle should tread carefully here. Instead of demanding perfection, they should be gratified that we finally have a president who has at least laid down some important markers of progress.
After decades of both Republican and Democratic administrations indulging the absurdity that “nuclear war fighting” could have a humane outcome, Obama has reversed course. It took 150 meetings, including 30 at the White House, and the president’s frequent direct intervention. The outcome is a bold statement of nuclear sanity, and for that President Obama should be applauded.

Howie P.S.: Not everyone is as enthusiastic: "Revised US Nuke Policy Offers Few Changes" (Democracy Now! with video/audio). Ben Cohen (TrueMajority.org) wants us to "Help Obama end our long nuclear nightmare."
Posted by Howard Martin at 8:35 AM