"Yes We Cannabis? CA Could Legalize Pot In November" 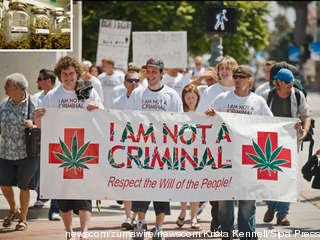 Advocates who want to take California's medical marijuana law to the next level so it can be fully legalized and taxed are putting the political argument in terms they think everyone in the nearly bankrupt state can understand -- pot can be the next cash crop. With competitive statewide races for governor and Senate on the fall ballot as well, legalizing pot may well be the next frontier in the culture war.
Advocates who succeeded in getting the legalization measure on the Nov. 2 statewide ballot say it's an obvious solution for the Golden State's fiscal woes. Detractors of the Regulate, Control and Tax Cannabis Act of 2010 come in many cases from law enforcement. Others fear that because marijuana is still illegal under federal law, the state would be targeted in a lawsuit.

Supporters of full legalization -- medical marijuana is allowed in California -- say they hope the federal government takes a close look at what they believe will be a winning issue this fall. They say the Obama administration has taken a look-the-other-way approach as more states legalize medicinal marijuana.

"It may be a signal they could broaden that policy," Ellen Komp, deputy director of California NORML, told me in an interview this morning. "We're testing the water to see how this might go. State after state is coming on board with medical marijuana with tax dollars in their eyes."

The initiative, which qualified last week with more than 694,000 signatures, would legalize for people over 21 possession of one ounce of marijuana. Californians also could grow a 5-foot x 5-foot plot of marijuana plants for their own use. It would leave to local jurisdictions how they would choose to tax and regulate any commerce around marijuana using a similar structure to California's medicinal law.

The candidates who will share the ballot with the marijuana initiative haven't taken firm positions. A spokesman for Attorney General Jerry Brown (D), running for governor, has "no position" because in his job he's tasked with preparing the initiative for the statewide ballot. Brown in the past has said that as the state's top law enforcement officer he can't support anything that violates federal law. But at the same time as attorney general Brown worked on crafting guidelines for compliance with California's medicinal marijuana law.

You can bet Republican Senate candidates will be pressing Sen. Barbara Boxer (D) on her position. We've asked her campaign and haven't heard back. (Update, 5:30 p.m.: Boxer's campaign tells me she opposes the initiative.)

Recent polls show 56 percent of voters support taxing and regulating marijuana. State Sen. Tom Ammiano (D) has a bill proposed to tax and regulate marijuana that is similar to the ballot initiative. The difference is that voters are being asked to allow local counties to opt into legalization.

"This isn't as much a culture war as it also is the long overdue rational conversation on public policy for how we're going to treat marijuana," said Ammiano spokesman Quintin Mecke. "We can try and pretend that people aren't using marijuana and that the war on drugs is working or we can acknowledge reality. This question is no longer a joke about 'What are you smoking' or 'How high are you,' and the economics of the situation in California and nationally have provided us a window to have this conversation."

Opponents say privately they think this is the first salvo in a longer national discussion that may ultimately end up in legalization. But they don't think the U.S. is ready. Several other states besides California may have similar initiatives on their 2010 ballot. Advocates in other states have said they might wait until 2012 in hopes of higher turnout for a presidential election helping their cause.

This could be delicate political ground. President Obama has repeatedly mocked those who asked him at town halls about legalizing marijuana, and he's said he does not support such efforts. But he appointed a drug czar, Gil Kerlikowske, who focused more on treatment than on pot busts while serving as Seattle police chief. Drug arrests declined during his tenure, from 2000 until he was nominated for the administration post last spring.

As I reported when he was nominated, Kerlikowske in 2003 opposed a voter initiative calling for the policing and prosecution of marijuana crimes to be ranked as the lowest priority for Seattle. The initiative passed.

"The Controlled Substances Act is one that's enforced by the federal government. Marijuana is a violation of that federal act," he told ABC. "But since it hasn't passed right now there is -- it would be improper to speculate on what the role is. But the federal government does and continues to enforce the Controlled Substances Act." He was asked if the courts would resolve the situation and said, "You can envision a lot of different things."

That's a far cry from Barry McCaffrey, who as drug czar under President Clinton, actively campaigned against state legalization initiatives. He opposed medicinal marijuana then, but later changed his mind to support it.

The Sacramento Bee reported last week that California's State Board of Equalization estimates the annual pot crop is worth about $14 billion, and legalizing and taxing marijuana could bring in up to $1.4 billion in revenue.
Posted by Howard Martin at 6:48 AM