There is a chance, albeit an outside one, that the entire West Coast could go green in November. Last week we noted that the California tax and regulate initiative had made the ballot, and reported on the Oregon Cannabis Tax Act initiative's ongoing effort to make the ballot. This week, we turn our attention to Washington state, where yet another marijuana legalization initiative campaign is underway. 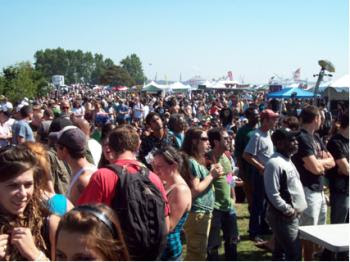 As the official ballot summary puts it:

"This measure would remove state civil and criminal penalties for persons eighteen years or older who cultivate, possess, transport, sell, or use marijuana. Marijuana would no longer be defined as a 'controlled substance.' Civil and criminal penalties relating to drug paraphernalia and provisions authorizing seizure or forfeiture of property would not apply to marijuana-related offenses committed by persons eighteen years or older. The measure would retain current restrictions and penalties applicable to persons under eighteen."

"We've had to go this route because the legislature isn't getting the job done," said Dawdy. "We had a decriminalization bill and a tax and regulate bill, and neither one could even get through committee. We've basically hit a brick wall in Olympia, and as activists, we're tired of waiting. The state is spending way too much on arresting, prosecuting, and sometimes jailing people for marijuana crimes. We have 12,000 people arrested for marijuana offenses every year. It's got to stop. If the legislature can't get it done, we have the initiative process."

The initiative campaign needs to gather 241,000 valid signatures by July 2. According to the campaign, they are shooting for 350,000 signatures and are about 20% of the way toward their goal. So far, it's an all-volunteer effort.

"We've been battling the weather, which has been horrible, and that makes it really difficult to work outdoor events," said Dawdy. "You can't gather very many signatures when it's raining. But we are starting to get inundated with signature petitions, and we remain confident we can get enough to make the ballot."

The campaign is finding support in some unusual places, Dawdy said. "The issue is really popular here, and one of our best hits was at a gun show. Libertarians and conservative Democrats go to those things. We're probably going to have a gun show coordinator for western Washington, and try to target those events. And we can use retired police officers instead of stinky hippies."

There are no signs yet of any organized opposition, but Dawdy said that was no surprise. "I would have been surprised if any popped up this early. I wouldn't expect it until we make the ballot, and then there will probably be some law enforcement group showing up to float the gateway theory and all that stuff."

"We're doing this on a shoestring," Dawdy explained. "We're getting online donations, a few in-kind donations, a few thousand-dollar checks, but funding from the national organizations hasn't really gelled yet. But the medical marijuana campaign in 1998 didn't get any big money until May, and they got on the ballot and one. I think we can do the same thing."

Unlike California and, to a lesser degree, Oregon, there is little money to be had from the Washington medical marijuana community, Dawdy said. "It isn't like California here," he said. "There are no $70 eighths, it's very much a nonprofit kind of system. What profits there are are small and underground, and they're underground for a reason."

National Organization for the Reform of Marijuana Laws (NORML) executive director Allen St. Pierre said that the national NORML board of directors had endorsed the initiative and that local chapters were involved in the effort, but that NORML wouldn't do much more than that until -- and unless -- the initiative makes the ballot, something St. Pierre suggested he doubted would happen.

"I'm very skeptical about their prospects," he said. "These guys said from the beginning they didn't have any money, and no initiatives not funded by billionaires have actually made it, yet they still decided to move forward. I told them NORML can't do much until they get on the ballot -- it's not worth the time and effort to point people towards initiatives that haven't made the ballot."

"We're getting sick and tired of being written off by people 3,000 miles away," retorted Dawdy. "That's just not fair, and it suggests that they don't really know Washington state despite coming out for three days each summer for Hempfest. People here are sick and tired of the situation, and legalization and reform are issues that poll strongly. People back East don't appreciate this and they don't understand this is one of the few issues where you can actually make the ballot with an all-volunteer effort."

That's not the only flak the initiative campaign is getting. One of the leading drug reform groups in the state, the ACLU of Washington has refused to endorse the initiative on the grounds that it does not include a regulatory system for marijuana. In a February statement, the Washington ACLU's lead person on drug policy, Allison Holcomb, laid out its arguments:

"The ACLU supports marijuana legalization and will continue to work toward that goal. However, we will not be supporting I-1068 because it does not provide a responsible regulatory system."

"We believe that full marijuana legalization will be accomplished only through implementation of a controlled regulatory system. Marijuana should be placed under controls that not only remove criminal penalties for adult marijuana use but also address the public's concerns about health and safety. It is unrealistic to regulate it less than tobacco or alcohol."

"We're aware that some believe that I-1068's passage would force the legislature to adopt such regulations in 2011."

"However, the ACLU isn't willing to support an incomplete initiative in hopes that the Legislature will fix it. We believe that when seeking support of such an important and complicated issue, the public should be presented with a carefully considered and well-vetted proposal."

But the initiative campaign argues that Washington's stringent single-issue rule for initiatives blocks it from concocting an elaborate regulatory scheme. Passage of the initiative would force the legislature to then enact regulations, they said.

"All our initiative does is remove criminal penalties for adult use, possession, and cultivation," Dawdy explained. "That will put it back in the hands of the legislature to come up with sensible civil regulations. We would have loved to do regulations in the initiative, but the single issue rule on initiatives in our state is very strict."

The Washington ACLU also argued that support for legalization is less than solid and that a defeat at the polls would be "a significant setback" for the drug reform movement.

And so things stand as April begins. Initiative campaigners have about 90 days to gather the requisite signatures and make the ballot. Maybe then they'll begin to get some respect. And maybe then they can join California, and hopefully, Oregon, in turning the West Coast green.

Email ThisBlogThis!Share to TwitterShare to FacebookShare to Pinterest
Labels: i-1068, marijuana