"Is Marijuana Really Safer Than Alcohol? Find Out For Free On 4/20" 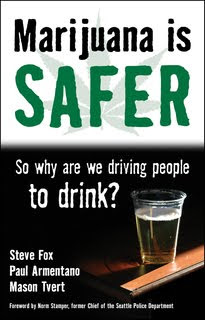 As part of a special promotion to raise public awareness, Chelsea Green Publishing, publishers of the book Marijuana Is Safer: So Why Are We Driving People to Drink? (2009) is making copies of the acclaimed title available for free for 24-hours on Tuesday, April 20.

According to a Chelsea Green press statement, the book giveaway is intended to raise awareness of marijuana’s relative safety when compared to alcohol in the face of California’s impending referendum for legalization in November. April is also coincidentally National Alcohol Awareness month.

“This promotion is all about getting the message out there,” said Kate Rados, Chelsea Green’s Director of Digital Initiatives. “Via our partners and web communities, we’ll be offering the free download to more than 200,000 people; we’re poised to make a massive impact on people’s perceptions of marijuana.”

Marijuana is Safer, written by nationally recognized marijuana-policy experts Steve Fox, Paul Armentano, and Mason Tvert, compares compares and contrasts the relative harms and legal status of the two most popular recreational substances in the world – marijuana and alcohol. Through an objective and comprehensive examination of the two drugs and the laws and social practices that regulate them, the book poses a simple yet rarely considered question: Why do we punish adults who make the rational, safer choice to use marijuana instead of alcohol?

Says Armentano: “Expert reviews by the World Health Organization, the Australian Institute of Health and Welfare, and many others have each separately concluded that cannabis poses far less risk to the consumer than does alcohol. It makes little sense for our society to condone, if not encourage, the use of alcohol – an intoxicant that directly contributes to tens of thousands of deaths annually and countless social problems – while simultaneously stigmatizing and criminalizing the use of cannabis, a substance that is incapable of causing lethal overdose and is associated with far fewer societal costs.”

The free download offer will remain in from 12am Tuesday morning until effect until midnight, eastern standard time. To download your copy, visit: http://www.scribd.com/doc/30178916/Marijuana-Is-Safer-FREE-DOWNLOAD.

Paul Armentano is the deputy director of NORML (The National Organization for the Reform of Marijuana Laws) and the NORML Foundation. A recognized national expert in marijuana policy, health, and pharmacology, he has spoken at dozens of national conferences and legal seminars and has testified before state legislatures and federal agencies. He appears regularly as a guest on national television, including Fox News and MSNBC, and his work has appeared in over 500 publications. Armentano is the 2008 recipient of the Project Censored Real News Award for Outstanding Investigative Journalism. He currently lives in California with his wife and son.

Mason Tvert is the cofounder and executive director of Safer Alternative for Enjoyable Recreation (SAFER) and the SAFER Voter Education Fund. He appears frequently in the news and travels the country promoting the “Marijuana Is Safer Than Alcohol” message. He resides in Denver, where he serves on the city’s Marijuana Policy Review Panel appointed by Mayor John W. Hickenlooper.

Steve Fox is the Director of State Campaigns for the Marijuana Policy Project (MPP), the nation’s largest organization dedicated to reforming marijuana laws. From 2002–2005, he lobbied Congress as MPP’s Director of Government Relations. He cofounded Safer Alternative for Enjoyable Recreation (SAFER) in 2005 and has helped guide its operations since its inception. He is a graduate of Tufts University and Boston College Law School and currently lives in Maryland with his wife and two daughters.