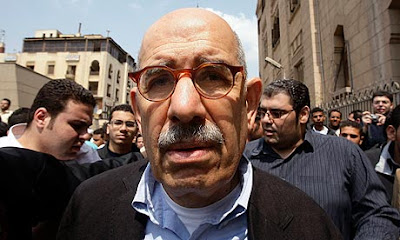 
No longer a top U.N. official, ElBaradei tells it like it is::

The former head of the UN’s chief nuclear agency, Mohammed ElBaradei, said in an interview with the British newspaper Guardian Wednesday that those who launched the war in Iraq were responsible for killing a million innocent people and could be held accountable under international law. He was clearly referring to US President George Bush, British Prime Minister Tony Blair, and their top military and security aides.

ElBaradei’s statement is much stronger than the 2004 statement made by U. N. Secretary-General Kofi Annan that:

The difference is that ElBaradei is suggesting that Bush and Blair engaged in genocide. Indeed, this is the conclusion that many of us came to long ago. And a conclusion that was strengthened by the publication of two papers in The Lancet that estimated a shockingly large excess mortality (see this and this).

But where are the calls from human rights activists? Where is the media on this?

This suggestion that Bush and Blair were guilty of war crimes, coming from a high-ranking former UN official, would ordinarily be considered major news. The Guardian interview was reported by the main British and French news agencies, Reuters and AFP, but the entire American corporate media gave it zero coverage. Not a single major American newspaper or television network mentioned it.

Howie P.S.: Here's the Guardian interview.
Posted by Howard Martin at 6:33 AM