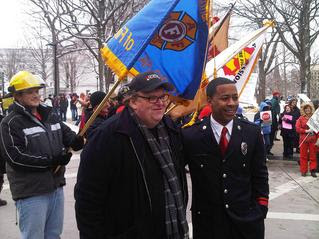 UPDATE: Michael Moore tells us "How I Got to Madison, Wisconsin."

Liberal filmmaker Michael Moore appeared in Wisconsin Saturday to encourage the pro-union protesters to keep up their struggle against Republican Governor Scott Walker’s budget plan as Moore continued to deliver his message that “America is not broke.” After listening to Sarah Palin and Bill O’Reilly discuss the issue Friday night, Moore claimed they inspired him to write a speech, which he then decided he needed to deliver himself in Wisconsin.

Moore stated that “Madison is only the beginning,” that the “rich has overplayed their hand,” and that Walker’s proposal is the “scam of the century.” Moore told the loudly cheering crowd that their message of “we have had it” has resonated in all fifty states. In a final battle cry, Moore urged the protesters, “Madison, do not retreat. We are with you. We will win together.”

Check out the full text of the speech or watch the clip below from Moore’s website: