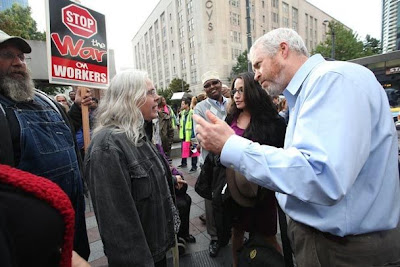 "Protester Cat Jobes, a nurse, talks with Mayor Mike McGinn after his speech Monday at the Occupy Seattle protest in Westlake Park."

Park security officers before midnight made three announcements by loudspeaker that the park had closed and those who remained could be arrested for criminal trespass. As of midnight no arrests had been made, but police cars with flashing lights were stationed at both ends of the park.

Protesters huddled to discuss what to do, with many agreeing it could be a bluff to frighten or demoralize them. Others questioned who was in control — the mayor, who had seemed to support their cause earlier in the day, or the police and parks departments.

Despite the rain, protesters had intended to stay the night, sheltering themselves with cardboard and tarps, since tents are not permitted. Last week, there were 25 arrests as police removed tents of protesters who refused to take them down.

Monday night, police and park officials began asking people to leave starting at about 10 p.m., according to protester Neal Bernstein of Federal Way.

Confusion reigned for a couple of hours. Finally, a representative of Mayor Mike McGinn's office showed up and spoke privately with some protesters and with the ranking police officer on site. But the representative refused to identify himself, saying only that he was "just having conversations with people."

Several protesters said the mayor's representative had promised them there would be no arrests overnight. But there were no guarantees for Tuesday night, they said.

Seattle Police Lt. Deanna Nollette said shortly after midnight that there had "not yet" been any arrests. She said, "We're trying to balance the interests of the businesses and the community around the park" with the First Amendment rights of the protesters.

She declined to say why the parks department and police officers decided to threaten arrests on Monday night. And she wouldn't say what would happen next. Using a football game analogy, Nollette said that would be like "showing our playbook" to the other side.

When asked why the parks department hours weren't enforced last week, she said, "Many dispensations have been given."

Bernstein said, "This comes the day after [the mayor] came down and gave us coffee," and added that several volunteer lawyers have been negotiating with the city. He said Monday night's police threats were a sign of bad faith.

Bernstein speculated the threatened arrests were to frighten the protesters and possibly reduce their numbers.

He added: "This is truly spontaneous. People are coming out on the streets because they are frustrated."

Monday afternoon, McGinn had stopped by the park and told protesters they were welcome to spend the night at City Hall.

Another woman, Cat Jobes, a nurse, said of the city's no-tents policy, "I think it's baloney, or malarkey."

Pattin said he and others planned to spend the night in sleeping bags on top of cardboard and tarps, then put another tarp on top of their bags and seal most of it, like a "pita pocket."

Monday, afternoon Joyce Glasgow, a writer and veteran protester of the Vietnam War and the World Trade Organization, argued politely with Pattin and others while defending the mayor. "I think the mayor has his heart in the right place," she said.

During his visit, McGinn had offered moral support to the protesters as he urged federal lawmakers to take action on President Obama's jobs bill, up for an initial vote Tuesday in the Senate.

"People are hurting more and more," he told a crowd of several hundred. "Good jobs are hard to come by."

Glasgow did not plan to spend the night in the park, but she said it made sense for some people to camp at City Hall Plaza. "I think it's a good place for people who need a break from the wet and the rain," after which they could return to Westlake to continue their protests, she said.

"I don't think there's anything wrong with that," she added. "It's not a defeat. It's not giving in to the establishment."

Aaron Pickus, a mayoral spokesman, said in the afternoon that McGinn was striking a balance, supporting protesters' right to free speech, but also public safety and other people's right to access the park. He noted that City Hall — "the center of politics" — was an appropriate place to protest. Wednesday afternoon, according to Pickus, the protesters were "actively discussing" the mayor's offer to set up camp at City Hall.

Before the late-night push to clear the park, the day's theme for protesters had been jobs, jobs, jobs. It began with a rally at 5 p.m. at the north end of the park and continued with a small march around the center of downtown and a candlelight vigil at 7 p.m.

UPDATE at 12:51 AM: As per the livefeed that just went dead, the group has called a special assembly. Speakers believe that police don't intend to arrest them, but rather plan to continue repeating loudspeaker announcements that the park is closed in a an attempt to keep them awake all night. Protesters note that 7-11 is selling coffee. A man just announced: "I just want to say that the mayor and police chief are obviously having a political battle and we are caught in between. We should continue to occupy this park." MORE...