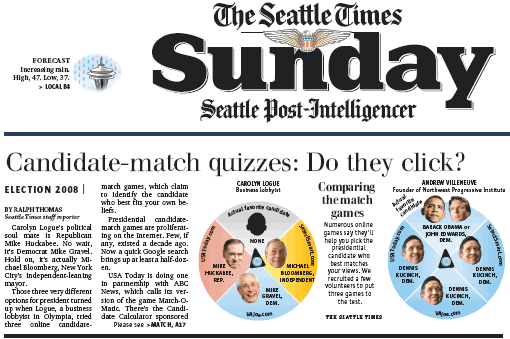 The story, by reporter Ralph Thomas, is about presidential matchmaking quizzes, which - as he writes - "claim to identify the candidate who best fits your own beliefs." I was asked to be a volunteer, and though the quizzes were just issues-based (and didn't take into account my values or my actual feelings), I had a lot of fun participating. My thanks to Ralph for the opportunity.

I guess the whole Seattle metropolitan area now knows that I am undecided between Barack Obama and John Edwards. (Readers, if you support either Edwards or Obama, feel free to make your pitch to me in the comments!) 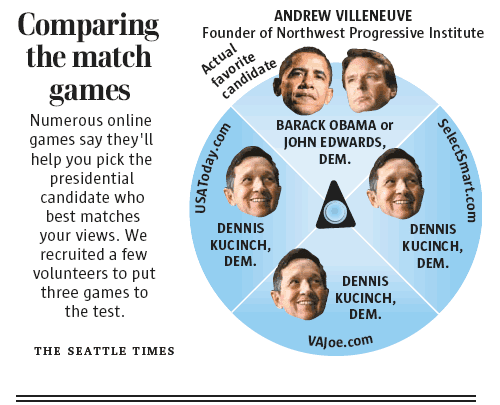 Here's a background on all the volunteers, myself included:

The Seattle Times enlisted four people from across Washington's political spectrum to put three games to the test. Their results were all over the map.

Tom McCabe, executive vice president of the Building Industry Association of Washington and an outspoken conservative, said his favorite candidate right now is former Arkansas Gov. Mike Huckabee. But none of the games listed Huckabee as the best choice for McCabe.

Alex Hays, head of the Mainstream Republicans of Washington, is a big supporter of Republican Sen. John McCain. While one game matched him with McCain, another said he aligned with three Democratic senators — Joe Biden, Barack Obama and Hillary Clinton.

"Good God," Hays exclaimed when a third game suggested Ron Paul, the former Libertarian nominee who is now running as a Republican. "Now that's a kick in the head."

Logue got similar results: all conservative Republicans on one game, all liberal Democrats on another.

Only Andrew Villeneuve, a liberal blogger and founder of a think tank called [the] Northwest Progressive Institute, found any consistency among the games. All three said his closest match is Kucinich, a congressman from Ohio and a Quixote-esque candidate for president. Villeneuve said he agrees with Kucinich on a lot of issues, but is torn between two other Democrats, Obama and John Edwards.

I wasn't surprised that Kucinich repeatedly showed up as the top result, given that the quizzes only consider issue positions. My views are squarely populist and progressive. Nobody in the Democratic field is better at plainly stating and defending (most of) those views than Dennis. He says what he believes.

But a candidate's positions on the issues are not my sole criteria for picking a candidate. In fact, they're not all that important, not to me or most Americans. As I observe in the Times article:

Villeneuve said the match games do not factor in a candidate's emotional appeal.

"Most Americans don't pull out a scorecard and run the math on a host of issues when it's time to vote," he said. "People vote who can they identify with, who they feel they can trust."

More simply, authenticity matters. Dennis Kucinich is great at amplifying the strong stance of Americans fed up with the failed right wing agenda (which is most of us). But that doesn't make him qualified to lead this country. In my eyes, his odd behavior certainly doesn't make a positive impression. I don't sense that Dennis necessarily shares all of my values, either.

After months of following the presidential race - watching debates on television, listening to the YearlyKos forum live in Chicago, and attending events featuring individual candidates here in Seattle, I know who my final choices are. It's either John Edwards or Barack Obama.
Each brings different strengths and makes a compelling case, though both are strong communicators and refreshingly closer to the people than Hillary Clinton. But only one can be my primary selection. I've got about a month and a half to decide before the precinct caucuses arrive - and I welcome your help.