"Too Much of a Bad Thing" 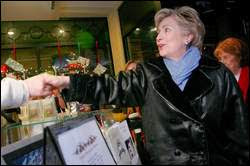 Operation bug squash is underway. That crackling sound you hear is made by the Clintons crushing the carapaces of their opponents, with special reference to Barack Obama.
He is getting the same treatment meted out to Paula Jones and any other human who got or gets in the way of that warm-hearted, humanitarian couple. Their first and last reaction to anybody they conceive as a problem is to smash him or her. It was the Clintons' repeated decision to destroy the women whom Bill bedded that triggered the chain of events leading to his trial in the US Senate. By the time Hillary and Bill have finished with Obama the real man may be unrecognizable to voters in Iowa or any place else.

Once the polls showed Obama might be the winner in Iowa and New Hampshire, America's glamour power couple sent surrogates out on the hustings, depicting Obama as a teenage dope peddler, as the Muslim Manchurian Candidate and as a child in an Indonesian madrassa being trained in Islam.

They have a neat way of defaming an opponent. Bill Shaheen, co-chairman of the Clinton campaign in New Hampshire, gets on a TV program and slanders Obama by suggesting others, not Shaheen, might wonder if Obama had been a dope peddler in his youth. That's the first hit, then he hits again by apologizing for having said it in the first place. The more he apologizes, the more he repeats the slander. It's a cute trick.

How do the Clintons get people to do their dirty work? A recent notable example is Bob Kerrey, holder of the Medal of Honor for bravery in Vietnam, former governor of Nebraska, former US Senator from Nebraska and now the President of the New School University in New York. Why has he been spending his time in Iowa spreading slanders about Obama?

In the politics of personal destruction department, a somewhat more subtle suggestion is that Obama is not "ready" for the White House. Everybody else in the race except Obama apparently is "ready" to be President.

If imputations of non-readiness raise an eyebrow or two over what is intended, the Clintons' harping on Hillary's vast experience as opposed to Obama's is legitimate. No doubt about it, Hillary has had more experience than Obama. Could it be she has had too much more experience?

What exactly Hillary's experience may consist of is locked up in Bill Clinton's presidential library, closed to the public and to historians doing research. Since the records of what she did and how she did it is not to be seen and studied, the reasonable conclusion is that it contains experiences Hillary would just as soon voters do not know about. The Clintons' reputation for secrecy matches that of their reputation for grudge holding and exacting revenge.

The Clintons' money secrets are vast and opaque. They talk the transparency game but they do not play it. Not long ago, for instance, Bloomberg News reported, "Securities and Exchange Commission documents and financial-disclosure forms filed by Hillary Clinton show that Bill Clinton, 61, has a financial stake in three investment entities registered in the Cayman Islands by Burkle's Yucaipa Cos. LLC.

"In 2004, Hillary Clinton, a New York senator, said she wanted to close the 'loopholes' for 'people who create a mailbox, or a drop, or send one person to sit on the beach in some island paradise and claim that it is their offshore headquarters.'"

Somebody in the Clinton camp should be giving us a seminar on tax shelters some day soon.

Over the last decade, Bill Clinton has raised more than $500 million for his foundation, allowing him to build a glass-and-steel presidential library in Little Rock, Ark., and burnish his image as an impresario of global philanthropy. The foundation has closely guarded the identities of its donors--including one who gave $31.3 million last year.

The New York Times has compiled the first comprehensive list of 97 donors who gave or pledged a total of $69 million for the Clinton presidential library in the final years of the Clinton administration. The examination found that while some $1 million contributors were longtime Clinton friends, others were seeking policy changes from the administration. Two pledged $1 million each while they or their companies were under investigation by the Justice Department.

Other donations came from supporters who had been ensnared in campaign finance scandals surrounding Mr. Clinton's 1996 re-election campaign.

In raising record sums for her campaign, Mrs. Clinton has tapped many of the foundation's donors. At least two dozen have become "Hillraisers," each bundling $100,000 or more for her presidential bid. The early library donors, combined with their families and political action committees, have contributed at least $784,000 to Mrs. Clinton's Senate and presidential coffers.

To anyone who has been around politics, it's clear that the Clintons have incorporated what they refer to as their philanthropies into the campaign and are using it as a money drop and a patronage sink. Now there is something which Hillary can rightly claim experience with.

If he can wipe enough of the Clintonian slime off himself, Obama may be able to come out from under and explain to the world that sometimes less experience is more and better.

Howie P.S.: For some kindler and gentler Hillary coverage today, there's "Clinton gets lots of help from her friends" in the LA Times and "Clinton pops in at Popovers" from Foster's Daily Democrat (NH). Today's vocabulary builder:

carapace:
1. animal shell: a thick hard case or shell made of bone or chitin that covers part of the body, especially the back, of an animal such as a crab or turtle

I think the author is referring to definition #1 but it might apply to #2, as well.

Barack Obama
Posted by Howard Martin at 8:08 AM