"Liberal talker: 'Hillary, I do not want you to be the nominee'" 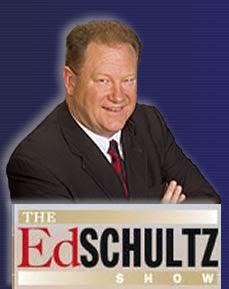 Schultz unleashes barrage against Clinton when she doesn't appear on show--Lamenting presidential candidate Hillary Clinton's failure to appear on his radio show, liberal host Ed Shultz said he does not want the former First Lady to get the Democratic nomination because she seems unwilling to talk directly to the party's base.
Schultz, who bills himself as America's No. 1 progressive talker, said Clinton has complained in private meetings about the dominance of conservative talk radio yet refuses to appear before an audience of liberal likely voters, unlike her closest competitors, Barack Obama and John Edwards. Schultz also called out Sen. Joe Biden (D-DE) for not appearing on the show to promote his presidential campaign.

"I am absolutely perplexed about how Hillary Clinton can stand up and say that 'we're so concerned about the right wing sound machine and Rush Limbaugh and (Sean) Hannity and all these other people with microphones, where’s our people,'" Schultz said. "Well, you know what Hillary? Here we are; here we are."

The Fargo-based host reaches more than 3 million listeners on over 100 radio stations nationwide. He said there was no excuse for Clinton not agreeing to be a guest, especially after Obama called into the show a day earlier and Edwards agreed to be a guest on Wednesday's show.

"The folks who have been there a long time and haven't been able to deliver on these issues they will throw up this argument: 'You need more seasoning. You need to have been in washington longer. You need to know how the game is played.' And I keep telling folks, 'We don't need somebody who knows how to play the game better; we need to put an end to the game-playing," Obama said. "They all thought I was just fine when they were 20 points ahead in the polls, I think they're starting to sweat a little bit and that's OK."

Schultz's dismay at his inability to score Clinton as a guest came a day after she hit all six broadcast and cable morning news programs, repeating her coup earlier this fall, securing interviews on every Sunday morning show. Aside from such road-block coverage though, Clinton generally maintains an arm's length relationship with the press.

During his nearly 10-minute diatribe, though Schultz noted that he "carried more water for John Kerry than anybody else on the radio" and would have provided the New York senator with a friendly forum to express herself.

"Does Hillary Clinton think that I am going to nail her? Does she think that this is some kind of torpedo thing or something?" he asked. "Every time the Bush White House gets in trouble they don’t run, they sprint with a stopwatch to Fox News. They can’t get there fast enough. They call their conservative talk show hosts on the air from the White House demanding access. That my friend is infrastructure. If we are going to build the confidence of progressive listeners, independently minded thinking people in this country ... maybe it would be good to talk to the folks unedited."

Schultz said President Bush "coddled" right-wing talk-show hosts "right into the White House." While they didn't quite get into the front door, the Bush administration did invite 42 mostly right-leaning hosts to broadcast from the White House lawn last year.

"That president spent more time with right wing talkers than he does with the families that have served up lives in Iraq," Schultz charged. "They think talking to the American people is important. They think getting their base solidified is huge. Where are you Hillary? You should be on all of these progressive talk shows weekly. All of them. Not mine, all of them, ok?"

In January, RAW STORY reported on an earlier Schultz tirade directed at the Clinton camp.

"Cutting to the chase, Hillary's people treat us like dirt," Schultz had complained. "We are constantly disregarded, told things that aren't true, and given speculation an interview might happen someday."

Posted by Howard Martin at 4:57 AM