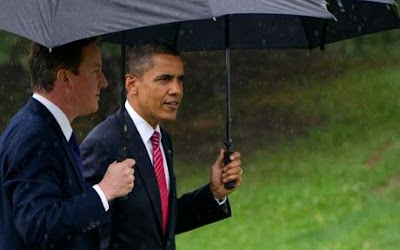 Barack Obama, the US President, with David Cameron in Toronto. Photo: AFP/GETTY

He may have been hailed for his decisiveness, but Barack Obama sacked the wrong man and has yet to sort out his Afghanistan policy---So Obama would do well to avoid congratulating himself on winning last week's news cycle by brutally ending McChrystal's illustrious career. He has further alienated the broader military constituency and done nothing to curtail the in-fighting among his top foreign policy officials, who are apeing their economic counterparts.

With members of his inner circle like Emanuel and David Axelrod likely to return to Chicago after November's mid-term elections, Obama could find the White House a very lonely place next year. MORE...

Howie P.S.: I never recommend that any US President allow a photograph with an umbrella, especially with a British politician. Another turd in the punchbowl: "Endless war, a recipe for four-star arrogance" (Andrew Bacevich (WaPo, op-ed):

The responsibility facing the American people is clear. They need to reclaim ownership of their army. They need to give their soldiers respite, by insisting that Washington abandon its de facto policy of perpetual war. Or, alternatively, the United States should become a nation truly "at" war, with all that implies in terms of civic obligation, fiscal policies and domestic priorities. Should the people choose neither course -- and thereby subject their troops to continuing abuse -- the damage to the army and to American democracy will be severe. MORE...

Posted by Howard Martin at 6:34 AM