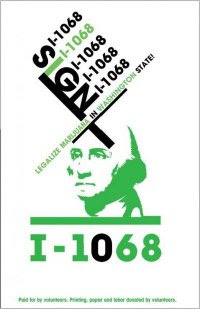 With a nod to its base, the campaign to legalize marijuana for adults in Washington has made an appointment to turn in initiative signatures to the secretary of state's office at 4:20 p.m. Friday.

The late-in the day timing (Friday is the last day for campaigns to turn in signatures) will help Initiative 1068 gather John Hancocks until the last minute. The campaign has struggled to gather the required 241,000 signatures of registered voters for a spot on the November ballot. The time - 4:20 p.m. - is also well known to marijuana enthusiasts as the time of the day when people across the world light up.

State officials say the I-1068 campaign has told them they've got about 200,000 signatures so far - and have been getting many petitions back every day. The state Elections Division urges campaigns to submit at least 300,000 signatures, allowing for a pad to cover duplicate or invalid signatures.

Howie P.S.: Sensible Washington is having a volunteer celebration tomorrow @ Alki from noon-6pm. I-1068 was a grassroots, volunteer=driven effort. By comparison, "Beverage distributors pour $1.4 mil into liquor privatization" (seattlepi.com):

Two big beverage distributors have given $1.4 million to Initiative 1105, one of two measures seeking to privatize liquor sales in Washington state.

I-1105 has until Friday provide the secretary of state 241,000 signatures of registered voters to qualify for the November ballot. They're supposed to drop off signatures at 1:30 p.m. that day. Odom Southern Holdings of Bellevue has given $654,000 to the measure and and Young's Market Company of Los Angeles has chipped in
$850,000. The two companies both cut $320,000 checks on June 23, according to the state Public Disclosure Commission.

Email ThisBlogThis!Share to TwitterShare to FacebookShare to Pinterest
Labels: i-1068