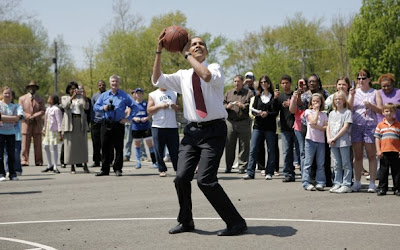 
To say that President Obama loves basketball understates the role of the sport in his life. He has been devoted to the game for 40 years now, ever since the father he did not know and never saw again gave him his first ball during a brief Christmastime visit. Basketball is central to his self identity. It is global yet American-born, much like him. It is where he found a place of comfort, a family, a mode of expression, a connection from his past to his future. With foundation roots in the Kansas of his white forebears, basketball was also the city game, helping him find his way toward blackness, his introduction to an African American culture that was distant to him when he was young yet his by birthright. MORE...