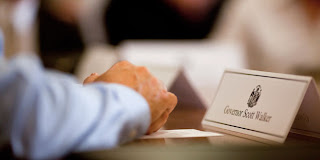 UPDATE: I had to go back and look for the "silver lining":


Referring to Walker, but possibly foreshadowing a Romney victory in November, Charity Schmidt sees a silver lining. "There are two possible effects. One is people feel utterly defeated and just drop out of the movement. Or the other effect is people realize the change they want to see is not going to happen through electoral politics. Our power is through collective action, our power to withhold our labor, our power to interrupt their work."

Howie P.S.: Not much silver in that lining, for me.


The recall is also a study in the paths not taken for the Wisconsin Uprising and why the Democratic Party is the graveyard of social movements. There was an expression among activists in Wisconsin that went, "One year longer, one year stronger" a year after the beginning of the "Uprising." But the reality is that, one year longer, the left as an organizing force is, in actuality, "one year weaker." Mike McCabe, director of the Wisconsin Democracy Campaign, a nonpartisan group that tracks money in state politics, argued the secret behind Walker and decades of Republican success nationwide is "a rich-poor alliance of affluent suburbs and poor rural counties." In the recall, Walker dominated country and suburb alike. McCabe said in 2010, "Walker carried the 10 poorest counties in the state by a 13 percent margin," which used to be reliably Democratic. He said, "Republicans use powerful economic wedge issues to great impact. They go into rural counties and say, do you have pensions? 'No.' Well, you're paying for theirs, referring to public sector workers. Do you have healthcare? 'No.' Well, you're paying for theirs? Do you get wage increases? 'No.' Well, you're paying for theirs. MORE...

Posted by Howard Martin at 3:47 PM