Al Gore on the "Today" Show ( with video) 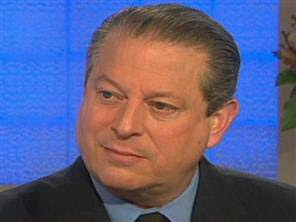 “I thought it was improper,” Mr. Gore said of the decision. “He was charged with knowledge that could incriminate his bosses in the White House, which included the vice president and the president. I thought it was very disappointing.”

Mr. Gore said the Libby pardon differed from the Clinton administration’s pardons “because in this case the person involved is charged with activities that involve knowledge of what his superiors in the White House did.”

As for 2008, Mr. Gore said he doubted he would be a candidate again ever. Asked to talk about some of the current candidates in the Democratic field — including Senator Hillary Rodham Clinton — he demurred. That response, too, for any possible endorsement at this point (remember his backing of Howard Dean?).

Here’s the exchange with Meredith Vieira from this morning:

Q: You were vice president while Senator Clinton first lady. Does she represent a fresh face? You said in–when you weren’t going to run in 2004 the party needs fresh faces.

Mr. Gore: Again, it’s 500 — there are 500 days between now and the election, and that’s the simple reason why I’m not ready to sit down and give you an assessment of all the candidates.

Q: But do you think she represents — why not? You can assess them, can’t you?

Q: You don’t have to endorse, but…

Mr. Gore: I’m focused on trying to get this message out about the climate crisis. And the horse race of American politics is going to continue to play out over the next year and a half and who’s ahead and who’s behind on any given day, who’s going to the starting gate, who’s not. You know, I’ve kind of fallen out of love with politics.

Posted by Howard Martin at 5:46 PM