"Sheehan threatens to run against Pelosi" 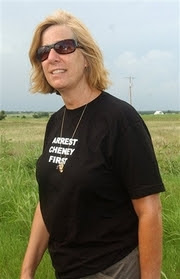 Cindy Sheehan, the slain soldier's mother whose attacks on President Bush made her a darling of the anti-war movement, has a new target: House Speaker Nancy Pelosi.

Sheehan, who announced in late May that she was departing the peace movement, said she decided to run against Pelosi unless the congresswoman moves to oust Bush in the next two weeks.
"I think all politicians should be held accountable," Sheehan told The Associated Press on Sunday. "Democrats and Americans feel betrayed by the Democratic leadership. We hired them to bring an end to the war."

Sheehan said she will run as an independent against the San Francisco Democrat in 2008 if Pelosi does not file articles of impeachment against Bush by July 23. That's when Sheehan and her supporters are to arrive in Washington, D.C., after a 13-day caravan and walking tour starting from the group's war protest site near Bush's Crawford ranch.

Although Sheehan has never held public office, she said she already has the name recognition and would not have to run against Pelosi in a primary.

"I would give her a run for her money," Sheehan said.

Pelosi spokesman Brendan Daly said the congresswoman has said repeatedly her focus is on ending the war in Iraq.

"She believes that the best way to support our troops in Iraq is to bring them home safely and soon," Daly said in an e-mail to the AP. "July will be a month of action in Congress to end the war, including a vote to redeploy our troops by next spring."

Sheehan, who turns 50 on Tuesday, said Bush should be impeached because she believes he misled the public about the reasons for going to war, violated the Geneva Convention by torturing detainees and crossed the line by commuting the prison sentence of former vice presidential aide I. Lewis "Scooter" Libby. She said other grounds for impeachment are the domestic spying program and the "inadequate and tragic" response to Hurricane Katrina.

Sheehan plans her official candidacy announcement Tuesday. She was in Crawford over the weekend to ceremoniously give the keys of the 5-acre protest site near Bush's ranch to its new owner, California radio talk show host Bree Walker.

"I'm doing it to encourage other people to run against Congress members who aren't doing their jobs, who are beholden to special interests," Sheehan said.

Sheehan first came to Crawford in August 2005 during Bush's vacation, demanding to talk to him about the war that claimed her son Casey's life in 2004.

She became the face of the anti-war movement during her 26-day roadside vigil that drew thousands of demonstrators. But it also drew counter protests of Bush supporters, many who said she was hurting troop morale.

Sheehan recently said she was leaving the Democratic Party because it "caved" into the president. Last week, she announced her caravan to Washington, which she calls the "people's accountability movement."
Sheehan said she lives in a Sacramento suburb but declined to disclose which city, citing safety reasons. The area is outside Pelosi's district, but there are no residency requirements for congressional members, according to the California secretary of state's office. 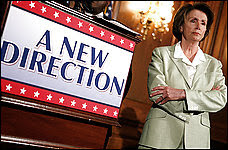 Howie P.S.: Sounds more like a promise than a threat, to me. Meanwhile, "Edging Away From Inner Circle, Pelosi Asserts Authority."
Posted by Howard Martin at 6:39 AM