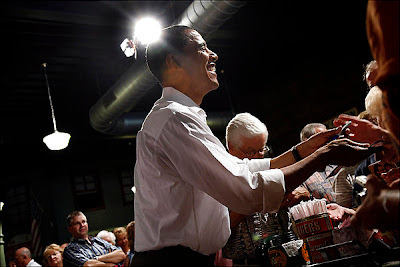 CEDAR RAPIDS, Iowa, July 4 -- Sen. Barack Obama (Ill.) took aim at his main Democratic presidential rival during his July 4 campaign swing through Iowa, saying that "change can't just be a slogan" -- days after Sen. Hillary Rodham Clinton (N.Y.) introduced her new slogan, "Ready for Change, Ready to Lead."
Obama has long cast himself as part of the future of politics, in contrast with a Clinton era that he portrays as part of a divisive past.

But Obama had a ready target on Wednesday: Both Clintons were campaigning nearby in Iowa, their first swing together. Bill Clinton repeatedly introduced his wife with reminders of the 1990s. The former first lady embraced the role of virtual incumbent on their holiday-week tour, promising to restore conditions -- in the economy and in the government -- to the way they were during her husband's administration.

Obama praised the former president, then quickly shifted his tone. "I think he did a lot of fine things, and I think he's a terrific political strategist," Obama told the Associated Press. "What we're more interested in is looking forward, not in looking backward. I think the American people feel the same way. What they are looking for is a way to break out of the harsh partisanship and the old arguments -- and to solve problems."

Clinton, a two-term senator who also spent eight years in the White House as first lady, is trying a "change -- but not too much change" approach. Her advisers believe that her candidacy, to become the first female president, inherently signals change. But they also think voters want something familiar, rather than an unknown quantity of the kind that Obama, a first-term senator and an African American, might represent.

At a rally in Waterloo on Wednesday afternoon, the Clintons were introduced as "the once and future presidents."

Obama, by contrast, is betting that voters will resist another Bush or another Clinton, after nearly 20 years of having a member of the families in office.

In a news conference between campaign stops, a transcript of which the campaign provided upon request, Obama said he is not campaigning against the last Democratic president.

"My campaign is not premised on running against the past -- my campaign is based on what we can accomplish in the future," Obama said. "I do think that we have not had in a long time a sense of common purpose where we've got a working majority to work on the big issues -- on health care, we haven't been able to get a system that works for everybody because it is continually blocked both in Congress and by special interests and lobbying."

Also, he said, "Change has to be something that is demonstrated day to day on an ongoing basis, and I think that my career and my campaign has demonstrated that."
Clinton continued to refuse to answer questions from the reporters traveling with her, holding scripted events and organizing meetings behind closed doors. She did participate in a bipartisan event, marching in the Clear Lake Independence Day parade. It was also attended by former governor Mitt Romney of Massachusetts, a contender for the Republican nomination for president.

Howie P.S.: Another story about hair and John Edwards: "Splitting Hairs, Edwards's Stylist Tells His Side of Story--Man Behind Pricey 'Dos Details Long Relationship" (WaPo).
Posted by Howard Martin at 3:39 AM