The debate showed that Sen. John Edwards was wrong several days ago when he suggested to his Senate colleague Hillary Clinton that “we should try to have a more serious and smaller group.” She was wrong when she replied, as picked up by television microphones, “our guys ought to talk.” The YouTubers’ questions, from bathrooms, bedrooms and backyards, changed the nature of debates for the better. 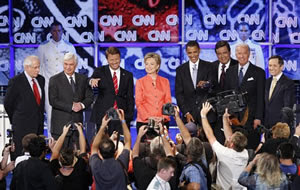 Seattle blogger Howard Martin watched the debate with some interest, since he believes the YouTube format is another sign that the gap between mainstream media and the world online is dwindling.

"Inside traditional media, people are looking out to see what's going on out there," he said.

Though he wouldn't be opposed to a more citizen-driven selection process when it comes to the questions (an online vote, for example), Martin said he was happy the questions at least originated from someone other than "hand-picked, media-types"

"It isn't perfect, but I like the format," he said.

Howie P.S. (a shocking confession): I found out about this blurb when a friend, masquerading as a reporter for the New York Times, left me a phone message. He said he had read the above and was looking for an interview with me for a "big story on Northwest bloggers." My chronic cynicism suspended by the propect of temporary fame, I feverishly tried to call him back at the fake phone number with the New York city area code. When that failed, I invested in whatever it costs to call *69 and got his number (with a 206 area code). From there it was just a matter of time (a long time) before I figured out his alias was a combination of his first name and his unmarried co-habitator's last name. You know what they say about payback. I do know where he lives.
Posted by Howard Martin at 5:47 AM