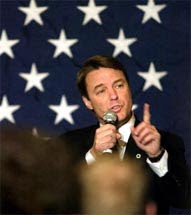 Democratic presidential candidate John Edwards slammed President Bush for connecting insurgents in Iraq with the terrorists who attacked the US on Sept. 11, 2001. The former Democratic senator said that the president's remarks "border on the delusional," and accused him of ignoring his own key role in allowing al Qaeda to gain strength in Iraq.
"The president's remarks today defending his Iraq policy without regard to actual facts border on the delusional," Edwards said in a statement released Thursday, hours after a Bush press conference. "The president claimed that the same people attacking U.S. troops today are the ones who perpetrated 9/11."

Speaking to reporters in the newly opened White House briefing room, Bush defended his war strategy and continued to conflate the war in Iraq with the terror attacks that brought down the World Trade Center.

"The same folks that are bombing innocent people in Iraq were the ones who attacked us in America on September the 11th," Bush said.

Edwards said that assertion ignores recent history, and the fact that there was no relationship between Iraq and al Qaeda prior to US troops invading.

"It must be nice to live in a world where your actions have no consequences," he said. "There was no group called Al Qaeda in Iraq before the president's disastrous mismanagement of the war gave them a foothold, a fact the president flagrantly ignores."

Democrats in the Senate this week are debating a Pentagon funding bill to which they are attaching measures aimed at reducing the US presence in Iraq. Keying off an interim report issued today that shows the Iraqi government is meeting less than half is required benchmarks for political progress, war critics are saying now is the time to begin bringing troops home.

"We've been told over and over again we can't expect a military victory in Iraq; it will take a political victory for us to finally see stability," Sen. Dick Durbin, D-Ill., said at a Capitol Hill press conference Thursday. "And yet, as the benchmark assessment reports tell us, there's little evidence of political progress in Iraq today, and certainly more violence and more death."

Sen. Hillary Clinton, the frontrunner for the Democratic presidential nomination, said Bush's report was an attempt to "put the best face on a failed strategy."

"Even the President's own portrait cannot paint over the reality on the ground: our strategy in Iraq is failing," Clinton said in a prepared statement.

Sens. Carl Levin, D-Mich., and Jack Reed, D-R.I., have introduced an amendment this week that would begin a drawdown of US forces within four months with a goal of having only a limited US presence in Iraq by April 31, 2008. That amendment has drawn support from some Republicans, including Maine Sen. Olympia Snowe, as public opinion continues to turn against President Bush's strategy in Iraq.

Tying the war in Iraq to the hunt for al Qaeda, Sen. John D. Rockefeller, who chairs the Senate Intelligence Committee, said invading Iraq prevented the US from "finishing them off when we had the chance in 2002 and 2003." He pinned the blame for reports of al Qaeda's increasing strength firmly on the decision to continue occupying Iraq.

“If we really want to protect our homeland and our citizens from attack, we must end our involvement in the Iraqi civil war and refocus on destroying the al Qaida organization that still wants to attack us here at home,” Rockefeller said.

President Bush indicated that he would continue his policy of vetoing any Congressional measure that attempted to establish a deadline for the withdrawal of US troops from Iraq.

At a White House press conference, a reporter asked Bush if he was still "committed to vetoing" any deadlines.

"You mean in this interim period? Yeah," Bush said. "I don't think Congress ought to be running the war. I think they ought to be funding our troops."

Bush insisted that he was "interested in their opinion" and would continue to work with Congress, but Bush said he hoped an amendment that would have nearly all troops out of Iraq by the end of April does not pass the Senate.

The only way Congress will be able to end the war, Bush implied, would be to cut off funding for the military mission.

"Congress has all the right in the world to fund. That's their main involvement in this war, which is to provide funds for our troops," Bush said. "What you're asking is whether or not Congress ought to be basically determining how troops are positioned. ... I don't think that would be good for the country."

Posted by Howard Martin at 5:23 AM