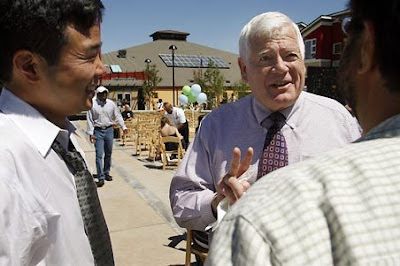 WASHINGTON — On May 10, a silver-haired member of Congress looked into the C-SPAN TV camera and said, "We have to stand up for the troops."

In a speech a few days later, that same congressman proclaimed, "Nothing less than protecting our troops is acceptable." The next morning, he repeated, "The best way to support our soldiers is to protect our soldiers."
If you weren't looking closely, you would think the speaker was military-friendly Norm Dicks of Bremerton or even Republican Sen. John McCain of Arizona.

But it was Seattle's longtime liberal Democrat, Jim McDermott.

The most colorful man in Congress now speaks in red, white and blue. The politician who visited Saddam Hussein's city in 2002 and denounced the White House's war plans praises America's fighting forces almost daily while also calling for an end to the war.

It's hard to tell whether McDermott has mellowed or that he no longer sticks out from the crowd simply because so many of his colleagues now agree the war was a bad idea. On Thursday, the House voted to withdraw troops from Iraq by April 1.

Still, McDermott remains a subversive in his own way. He has become a conduit for dissident voices from the Middle East whom the Bush White House eschews.

Iraqi oil workers, Palestinian politicians, Iranian scholars — McDermott finds them all, and when he can, brings them to the U.S. or sets them up on video conferences with other members of Congress to press the case against America's involvement in Iraq.

He wants to spread the word of leaders in Iraq and its surrounding nations who think they can resolve the conflict on their own.

"We need to know what the other side is saying," McDermott said in an interview. "We need to hear it from people who aren't part of the government and the U.S. establishment."

So far, he's not attracting the audience he'd hoped for among his colleagues. And Republican leaders aren't impressed.

"It's certainly important to hear other views," said Ken Spain, a spokesman with the National Republican Congressional Committee. "But I would encourage Congressman McDermott to listen to commanders on the ground from time to time."

McDermott says he no longer looks for opportunities to toss little bombs at the Bush administration.

His party controls Congress now, he said, and "there's different rules for that."

"When you're on defense you play hard. I knocked everyone down I could. But when you're on offense, you want to win.

"I've been on both sides, and you have to know your role."

McDermott's most famous role was in Michael Moore's polarizing film "Fahrenheit 911." He was typecast as the outspoken liberal who questioned the president's motives in going to war.

Now, he said, he doesn't need to be that brash.

Instead, in the past six months, he has hosted a Sunni member of the Iraqi Parliament and two key Iraqi union leaders who oppose a U.S.-backed plan to develop Iraq's oil resources.

He has been to the Middle East three times in the last year, including the day after the 2006 elections, when he went to Amman, Jordan.

"I tried to get some of my Democratic colleagues to go with me," McDermott said. But Democrats had just won control of Congress, and his colleagues did not want to leave while battles for the spoils raged.

In March, he arranged a teleconference for members of Congress with Iraqi and Palestinian politicians — some of whom couldn't get visas to visit the U.S., he said.

A Sunni leader was among those jammed into a TV studio in Jordan, while a Shiite political operative and tribal chiefs joined the editor of Jordan's major newspaper, more Palestinians and Arab nationalists on the phone from Baghdad.

Muhammad Al Daini, a Sunni leader in the Iraqi Parliament, was part of another meeting in McDermott's office in May.

Sectarian violence is a result of the U.S. unleashing Shiite and Sunni extremists, he believes. The U.S. fears losing control in Iraq and won't let other Arab leaders try to broker an end to the killing. And he says the Iraqi oil law, which would open oil fields to American companies, shows the war was about protecting U.S. oil interests.

He carries baggage from his incendiary comments about the war and the president. In 2002, for example, he memorably accused Bush of threatening war in Iraq as part of a plot to become emperor of America.

Only nine members of Congress attended the teleconference in March, including Rep. Jay Inslee, D-Bainbridge Island.

McDermott's staff includes Arabic translators, and his aides review foreign publications every day: Haaretz, from Israel; The Daily Star, from Beirut; Al-Quds Al-arabi, an Arab nationalist paper from London; and even Al-dawa, the mouthpiece of Muqtada al-Sadr, the powerful Iraqi Shia leader.

"I want to hear what the Arab 'street' is saying," he said.

LaMagna, who splits his time between Poulsbo, Washington, D.C., and Baghdad, has helped underwrite films on the war and taped McDermott's trips. He also arranged the broadcast links for the March teleconference.

McDermott also consults with Munther Haddadim, a former Jordanian Cabinet minister who studied water and irrigation as a graduate student at the University of Washington.

"Jim McDermott is one of the only people in Congress who wants to hear from all sides," Haddadim said.

In September, Haddadim arranged a visit by McDermott and a few other Democrats to Amman, where they met with Syrians, Sunnis, Shiites, Palestinians and Egyptians.

A visit from Iraq

Last month, McDermott and two other Democrats met with Hashmeya Muhsin Hussein, the president of the Electric Utility Workers Union in Iraq.

Hussein had trouble getting into the U.S. She is not an Iraqi government insider. She opposes the U.S. presence in Iraq and the proposed oil law.

With those credentials, it was inevitable she would end up in McDermott's office. The meeting included Reps. Mike Honda of California and Bill Delahunt of Massachusetts, who have been part of McDermott's Iraq study group for months.

McDermott asked why there isn't more reconstruction of electrical-power plants. "We're getting contradictory reports from the Iraqi government," he said.

Delahunt then jumped on the oil issue. Is the Iraqi oil law in the interest of Iraq and peace?

"No," Hussein said through a translator. The amount of profits is so excessive, she said, that the Kurds and others have held up the proposal. That's one reason the Iraqi Parliament announced it would take an extended break this summer, she said.

That's the kind of news that makes McDermott so frustrated by what's happening in Iraq.
"They took two months off while our troops are still fighting," he said in an interview.

"Why shouldn't I want to know what the other side is saying?"