"Jon Stewart patiently explains what YouTube is to CNN" (with video) 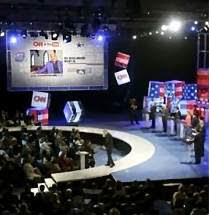 "We're devoting the entire show to last night's Democratic debate on CNN," announced Jon Stewart on Tuesday's Daily Show. "This debate was co-sponsored by YouTube. In this debate, candidates would be asked video questions voters submitted on the Web. If that just sounds like a town hall meeting, only without any human interaction -- dude, you just don't get it."
Stewart devoted much of the segment to CNN's inability to use its technological gimmickry effectly. "That's got to be like one of them twelve-foot monitors, is it not?" he said of the debate's enormous on-stage screen, which showed a webpage of which the questioner's YouTube video occupied a small corner, making it difficult for the home television audience to see.

"YouTube itself actually has a lot of features," Stewart explained patiently to CNN. "For instance, there's a little button on the screen of YouTube. You know what it does there? It's called -- what do you call it there? -- Full Screen Mode. Is that so hard?"

"Let me explain to you why video size is so important to the debate," he continued. "See, a lot of the young folks you're looking to draw in are probably going to end up watching the debate on -- I don't know -- YouTube."

As Stewart continued poking fun at the debate, Jason Jones came on to complain, "Who gives a rat's ass about my thoughts, Jon. I'm just a professional political correspondent. I'm not a 'real people.'"
When Stewart objected that "some of the people asked really good questions," Jones retorted, "Sure, it's easy to ask those questions when you're Joe Schmo ... Everything is easy for the schmoes. But they don't have to see these people the next day at the reporter-candidate friendship brunch."

Posted by Howard Martin at 6:22 AM