"Which Candidates the Stars Take a Shine to" (UPDATED) 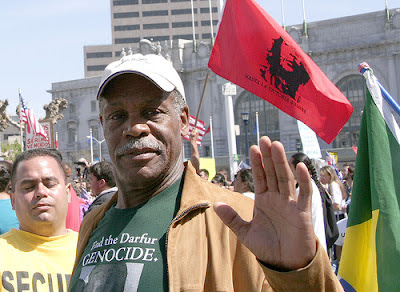 Paul Simon stumped across Iowa with Chris Dodd 10 days ago, marking the official start to the 2008 Celebrity Primary season; earlier Steven Spielberg endorsed Hillary Clinton, while his fellow Hollywood titan David Geffen shifted his support to Barack Obama. Here's the first in an occasional look at how the stars are coming out in the '08 presidential race:

* George Clooney: Vows support for Obama to Time magazine. ("I've actually had that conversation with him, just saying, 'Look, I'll give you whatever support you need -- including staying completely away from you.' ")

* Matt Damon: Also tells Time of his support for Obama. ("I think a lot of the problems in the world would be mitigated if he were the face of our country.")

* James Denton ("Desperate Housewives"): Will co-host a fundraiser for Edwards.

* "Babyface" Edmonds: Performed at a Clinton rally in D.C., along with "American Idol's" Katherine McPhee.

* Danny Glover: Stumped with Edwards in South Carolina, endorsed him. ("This is a campaign about real democracy.")

* Adam Levine, lead singer of Maroon 5: Declares to a Las Vegas radio station that Clinton is "a classy lady."

* Chuck Yeager: Rousing endorsement of Duncan Hunter ("the only candidate who has the best of Ronald Reagan's character and politics").

Bruce Willis, former Republican stalwart: Still undecided, told Vanity Fair his priority is free medical care for GIs. ("I'm waiting to see who's going to shake out as a candidate . . . and I'm going to say, 'I want you to make this issue part of your platform.' ")

Stephen Baldwin (one of the more prominent Hollywood types at the '04 Republican National Convention): "He's focused on his ministry and not on the political field yet," said a rep.

Angelina Jolie and Brad Pitt: Courted by many candidates; no endorsement yet. "They are looking at voting records and carefully following what the candidates are proposing on the issues that are the focus of their philanthropy and advocacy," said a rep.

Posted by Howard Martin at 6:52 AM