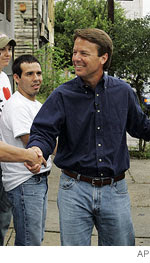 NEW ORLEANS -- John Edwards may be stuck in third place in the polls and fund raising in the race for the Democratic presidential nomination. But the populist seems to be playing an outsized role in driving the terms of the party's debate -- generally to the left -- on everything from Iraq to health care.
This week, the former North Carolina senator has made his most prominent bid yet to place the oft-ignored issue of poverty prominently on the 2008 agenda, with a four-day tour of some of the most run-down parts of the South and Midwest, beginning with his sixth trip this campaign to this city, devastated by Hurricane Katrina. He has talked about the issue more than any of his rivals, and was the first to craft a "poverty" plank in his platform.

About the time Mr. Edwards announced plans for his tour, one of his better-positioned rivals, Illinois Sen. Barack Obama, posted a poverty plan on his Website. Mr. Edwards ended his tour -- wending through a poultry plant and an industrial neighborhood hit by factory closing -- Wednesday in Kentucky. On that day, Mr. Obama delivered a major speech on the subject in Washington, D.C.

An Obama campaign official dismissed as "absurd" the notion that Mr. Edwards drove the debate on poverty or any other issues. But some voters feel otherwise. "I appreciate Edwards because he's at least talking about poverty," said Scott Myers-Lipton, a San Jose State University professor who caught Mr. Edwards speaking in New Orleans. "He's the only one talking about it."

"He's a serious candidate and he's not to be discounted just because he lags in the national polls," says Democratic pollster Mark Mellman, who is neutral in the nomination contest. "It's a smart strategy for the front-runners to follow him."

It is the essence of Mr. Edwards's strategy for winning the nomination: to come from the left, and win over the party activists who tend to dominate the early primaries and caucuses. Other candidates, notably front-runner Hillary Rodham Clinton, have tended to take a more cautious tack, in an attempt to preserve their ability to appeal to the middle should they ultimately win the nomination. But with little to lose, Mr. Edwards seems to feel freer to address issues that might alienate the party and business establishment. Just as former Vermont Gov. Howard Dean pushed the Democrats toward more staunch opposition of the Iraq war four years ago, Mr. Edwards seems to be having a big impact on forcing the pack to follow his agenda.

"He has worked very hard over the past four years to figure out what every constituency wants," says a leading progressive grass-roots political activist. "He has gone to groups -- from labor to environmentalists -- and said: 'How can I be the best on your issues?' "

Such appeals won Mr. Edwards the endorsement of abortion-rights leader Kate Michelman, and helped him win by a landslide a recent straw poll held by the liberal grass-roots online MoveOn.org on which candidate was favored by members for dealing with climate change.

Of course, message is just one factor that determines a candidate's appeal. Mrs. Clinton is citing experience, Mr. Obama his charismatic appeal for "change," and those so far are trumping Mr. Edwards's pitch to old-line Democrats. By adopting part of his message, the leaders of the pack may be able to limit his appeal for the party stalwarts who propelled Mr. Dean to an early lead in the 2004 presidential contest.

And while Mr. Edwards seems to have a knack for sensing what partisans want to hear, his campaign has failed to catch fire for other reasons. Many Democrats are looking to make a clear break with their 2004 loss to President Bush, when Mr. Edwards ran as the vice-presidential candidate on the failed ticket. His populist image has been muddied by attention to the time he spent between campaigns as a highly paid consultant to a hedge fund, and his campaign's spending $400 on a haircut. He has also failed to put together an organization on the scale of Mrs. Clinton or Mr. Obama.

Still, on issue after issue, Mr. Edwards has been the first to stake out where the party's consensus message seems to end up.

On Iraq, Mr. Edwards led the tack to the political left, apologizing early for his 2002 vote to authorize the war, pressing Congress to cut off money for the conflict and demanding an immediate exit for U.S. troops. Mr. Edwards's stance put tremendous pressure on Mr. Obama and Mrs. Clinton to vote against a recent funding measure, which they did, somewhat quietly. In March, Mr. Edwards laid out a detailed policy on revamping health care, calling for universal coverage -- and a business tax to pay for it. The next month, Mr. Obama put out his own proposal to dramatically expand coverage for the uninsured.
[Leading Left]

On taxing hedge funds and private-equity firms, the leading Democrats remained silent until last week, when Mr. Edwards complained that the current rules allow fund managers to pay taxes "at a lower rate than their secretaries." Within a few days, Sens. Clinton and Obama both said they back legislation that would raise those taxes.

It is an open question whether pushing poverty will have the same political resonance as, say, opposing the increasingly unpopular Iraq war. Poor people don't vote as frequently as wealthier citizens. And Mr. Edwards's main rivals are likely to get a large slice of the lower-income voters who do show up at the polls. Mr. Obama has appeal as an African-American candidate with a history of working in Chicago's poor neighborhoods as a community organizer. Mrs. Clinton can lean on the huge popularity of her husband with African-Americans.

Even so, Mr. Edwards's media entourage this past week was significantly larger than his usual traveling crowd. And he has certainly talked more than anybody else about poverty and spent more time in particular in hurricane-ravaged New Orleans, as a symbol of the intractable problem. He started the week here with a pledge to hire a full-time rebuilding czar to jump-start the balky recovery along the Gulf Coast, build a veterans' hospital in downtown New Orleans and create a program that would offer job training and "stepping stone" employment to 50,000 workers. He also promised to push the minimum wage to $9.50 an hour by 2012. "Nobody should be working in America and living in poverty," he said.

"This is not a political strategy," Mr. Edwards insisted to a New Orleans crowd when an audience member at a rebuilt school he was visiting posed sharp questions about his poverty platform as a political strategy. "This is an issue that America needs to focus on. I think the country cares."

Of course, the trip wasn't without a requisite request for donations. An email Mr. Edwards sent out in advance of the trip asked supporters to donate $8 each "to the campaign that wants to end poverty in our lifetime." Mr. Edwards's top campaign strategist, Joe Trippi, who ran Mr. Dean's 2004 campaign, and put out a similar missive, under the headline, "George Bush doesn't care about poor people."
In coming weeks, Mr. Edwards plans to shift his focus toward the middle class, and begin including policy statements on trade and taxation, globalization and corporate responsibility. Whether Mr. Obama and Mrs. Clinton will follow is unclear. "John may try to push them a little farther to the left than they want to go," an Edwards aide said.