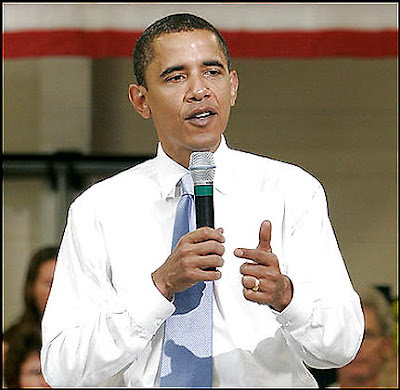 He raises tens of millions of dollars over a few months. His supporters are passionate, almost fanatical. And his grass-roots movement threatens a more established rival.

A description of Howard Dean in 2003 or Sen. Barack Obama today?
Obama campaign advisers -- many of them campaign veterans who watched Dean's slow rise and rapid descent at close range -- reject the comparison, arguing that their candidate and organization won't repeat the mistakes of the former Vermont governor.

But as Obama has shattered fundraising records over the past few months while continuing to trail Sen. Hillary Rodham Clinton (D-N.Y.) by double digits in polls, the challenge for the senator from Illinois has become clear: He must turn the intense devotion of his backers into a force that can win primaries, expanding his base of support beyond the narrow band of Democratic elites who backed Dean.

"It looks like a movement candidacy, and it's generating an enormous amount of enthusiasm, excitement and money," said Steve McMahon, a Democratic strategist who was a top adviser to Dean. "The question now -- as in all movements like this -- is whether or not the voters and the votes will follow."

Campaign finance records released Sunday showed the financial juggernaut that is Obama's candidacy: 258,000 individual donors, support from all over the country and $32.8 million raised over the past three months, $10 million more than Clinton raised for the Democratic primary over that period.

Yet Obama trailed Clinton by 16 points when he entered the race in February and by 15 points last month, according to polling by The Washington Post and ABC News.

Senior advisers to Obama say they are not troubled that he has not overtaken Clinton. They talk often about a "sequential strategy" that focuses exclusively on building a robust campaign organization in Iowa, where a caucus victory could provide a springboard to success in the New Hampshire primary and the early nominating contests beyond.

They argue that Obama's potent fundraising -- if managed wisely -- will allow him to compete directly with Clinton in the raft of states holding primaries on Feb. 5. And, they say, he is holding his own in the early-voting states on which his strategy depends.

"If they were affecting us -- hurting our ability to raise money or build campaign infrastructures around the country -- maybe we would be concerned, but they're not," Plouffe continued. "History reliably suggests it is not an indicator of how these elections are going to transpire."

Although Clinton has maintained a double-digit lead in many national polls, Cornell Belcher, one of Obama's pollsters, said the race is much closer in the early states where residents know more about Obama.

Strategists for all of the campaigns agree that voters' opinions of the candidates are undefined and that a clearer picture is expected to emerge after Labor Day, when voters will be paying more attention.

Democratic advisers in campaigns other than Clinton's say history is on their side: Only twice in the past eight contested primaries has the Democrat leading at this stage gone on to win the nomination.

In June 2003, Sen. Joseph I. Lieberman of Connecticut led the field of Democratic candidates with 20 percent of the support in a Gallup poll; Rep. Richard A. Gephardt of Missouri came in second, with 15 percent; and the eventual nominee, Sen. John F. Kerry of Massachusetts, was in third place with 13 percent. And Dean, who is now chairman of the Democratic Party, led both national and state polls in December 2003, only to lose primary after primary over the next few months.

Yet some strategists see similarities between Obama and Dean -- as well as former senator Bill Bradley (N.J.), who ran a losing campaign against then-Vice President Al Gore in the 2000 Democratic primaries.

Like Dean and Bradley, Obama is strongest among elites, whom other Democrats derisively call "latte liberals" -- a group that voices strong opinions but is not big enough to win him the nomination. Polls show that Obama is ahead of Clinton among voters with college degrees, while Clinton has a huge lead among voters who make less than $35,000 and those who have graduated only from high school.

Like his unsuccessful predecessors, Obama is more popular among men and independents, rather than with the women and working-class voters who generally drive the nominating process. But one major difference is that Obama has strong numbers among African Americans, about 40 percent of whom are backing him, putting him in a tie with Clinton.

"The people who he is getting money from are more elite Democrats who have more disposable income to send him," said pollster Mark Mellman, a Democrat who is not working for any of the campaigns. "That is a constituency that can create a lot of buzz but is not sufficient to win a nomination."

To help address that trend, Obama's campaign is doing some retooling: He is focusing more on the economy, which was the subject of a town hall meeting in Iowa last week as well as recent events in South Carolina.

Obama has made other subtle changes as well. He recently pulled one of his closest aides, longtime spokesman Robert Gibbs, out onto the campaign trail to help sharpen his message. Aides are working to get the occasionally long-winded senator to speak in shorter, crisper sentences, particularly in debates and town hall meetings.

After spending months organizing major rallies, the campaign is beginning to shift toward smaller venues, giving Obama a chance to interact personally with every voter at times, a tactic Clinton has adopted in Iowa. In particular, Obama will make more stops in diners and small venues in New Hampshire, where a small-town feel is prized.

Yet the campaign rejects questions about whether it needs to do something different to win.

"I'm puzzled by this Barack Obama 'second act' stuff," Gibbs said. "I'm watching the play, and we're still in Act One. And it's pretty good."

"We've got a book we're trying to write," Plouffe said. "It's less about this chapter and the next chapter. We've got a strategy, and we're going to keep executing it."

At this point in the 2004 campaign, Dean had done relatively little to build effective organizations in the crucial early states of Iowa and New Hampshire. Federal election records show Dean spent $177,402 in Iowa and $116,830 in New Hampshire during the first six months of 2003.

Obama, by contrast, has spent $866,000 in Iowa and nearly $500,000 in New Hampshire, according to the latest numbers. The money went mainly to the nuts and bolts of a ground campaign: rallies and events, mailing lists, office space, and salaries for nearly 100 people on the Iowa payroll and about 50 more in New Hampshire.

In Iowa in particular, Obama has some structural advantages that Dean lacked. He starts with a sometimes overlooked boost: The state shares a border with his home state of Illinois, and cities such as Davenport and Dubuque are part of media markets where Obama has been on the air since 2004. And Obama advisers say their success at fundraising will allow them to build a get-out-the-vote operation that could rival or eclipse Clinton's in the early states.

Plouffe described Clinton in a recent memo as the "quasi-incumbent" and argues that she is leading simply because voters know her better. With its millions in the bank, Obama's campaign has already launched ads in Iowa that emphasize his biography, noting his achievements working with both parties to get legislation passed in the Illinois legislature.

Obama aides insist he will not change from his generally positive message to take on Clinton directly. That would be difficult to do anyway, some party strategists note, because he is presenting himself as a different kind of politician. But over the past few months, his tone has shifted on the issue that most distinguishes the pair: Iraq.

Obama opposed the war, while Clinton voted for it in 2002. Without naming the senator from New York, Obama is increasingly stressing that point.

He said in Iowa last week that there are no "do-overs" on an issue such as war, invoking a phrase Clinton has used to say she will not apologize for her war vote. In Nevada on Friday, Obama dismissed Clinton's proposal to have Congress deauthorize the war, calling the plan "convoluted."

Dean's early opposition to the war helped generate much of his campaign's money and energy, but Obama supporters say the senator's run will be different because the energy behind his candidacy is not based solely on Iraq.
"It's not just antiwar people" who support Obama, said William Daley, a backer who was chairman of Gore's campaign in 2000, but those with "a broader desire for change."