Maybe so. The health insurance bill passed by the House isn't the bill I'd like to see, and as I expected, isn't one that's going to do a great deal for me. Being required to purchase insurance that I can't really afford and that, because of likely co-pays and deductibles, I can't really use, isn't anything like the single payer plan I've been advocating for decades.
Still, as The Littlest Gator says...

I know we had some bad defeats in this. I know they beat up on women as usual, I know it is not single payer, I know that the "robust" public option is not going to be robust enough. But let's just remember-- WE GOT RID OF PRE-EXISTING CONDITIONS! If nothing else were to have passed, this alone, this one thing, is going to save lives, heartache, family homes, family savings. Just that one change.

It will end the national scandal of medical bankruptcy—the number one cause of personal bankruptcy—by eliminating lifetime caps on insurer payments and limiting annual out-of-pocket costs. Medical bankruptcies affect up to 4,000 families every day in the United States—and 78 percent of them are fully insured.
· It ends abusive insurance company practices, including the denial of coverage based on pre-existing conditions and “rescissions”—the practice of canceling coverage when patients file claims.
· It provides subsidies to help middle-class and lower-income families afford coverage.
· Through an exchange, it offers people a wide range of choices of insurance, including a public health insurance option that competes with private insurers.
· It narrows the “donut hole”—the gap in Medicare coverage for prescription drugs.
· It creates incentives to increase the number of doctors and boosts funding for community health centers.
· It allows young people to be covered by their parents’ insurance up to age 27.
· It creates a new fund to help employers give health coverage to early retirees.
· It provides for efficient, computerized medical records and other tools to streamline medical care and increase quality.
· It cuts costs to the federal government as well as to families, reducing the deficit by more than $100 billion over the next 10 years—thanks, in part, to the existence of a public health insurance option, which lowers costs across the system.
· Ad it’s fairly funded—through employer responsibility and a surtax on the very highest earners, not a tax on middle-class health benefits.

It's also not the bill that the Human Rights Campaign might have introduced either, but they, too, find enough right to get over whatever's wrong, citing important gains for the LGBT community...

· Health Disparities - the bill specifically designates LGBT people as a health disparities population, opening up health data collection and grant programs focused on health disparities related to sexual orientation and gender identity. With collection of data and funding of research, we can better address the specific health issues facing LGBT people.
· Unequal Taxation of Domestic Partner Benefits - the bill ends the unfair taxation of employer-provided domestic partner health benefits, incorporating the language of the Tax Equity for Health Plan Beneficiaries Act. Without this tax penalty, more people will be able to afford employer-provided coverage for their families, and more companies will be able to offer these important benefits.
· Early Treatment for HIV under Medicaid - the bill also incorporates the Early Treatment for HIV Act, which allows states to cover early HIV treatment under their Medicaid programs, instead of withholding treatment for Medicaid recipients until they develop full-blown AIDS, This will dramatically improve the quality of life for low-income people with HIV, as well as saving taxpayers money and reducing the transmission of the virus.
· Comprehensive Sex Education - the bill provides funding for comprehensive sex education programs that focus not only on abstinence, but also reducing teen pregnancies and sexually transmitted diseases. After more than $1 billion wasted on failed and discriminatory abstinence-only programs, this funding will provide youth, including LGBT students, with the tools they need to live healthy lives.
· Non-discrimination - the bill prohibits consideration of personal characteristics unrelated to the provision of health care. HRC worked with a coalition of civil rights groups to develop and lobby for this language and we believe it will help protect LGBT people from discrimination in the health care system, where there are currently no federal protections for our community.

There's going to be a lot more to do - including moving the discussion from insurance to care - as we go forward, but first, let's get this done. It's worth doing, no matter what it doesn't do. It's not time to stop, but this is a place to start.

(2) "On Paying For Immoral Things, Or, Is Stupak On To Something?" (Washblog):

There has been a great wailing and gnashing of teeth over the past day or so as those who follow the healthcare debate react to the Stupak/Some Creepy Republican Guy Amendment.

The Amendment, which is apparently intended to respond to conservative Democrats’ concerns that too many women were voting for the Party in recent elections, was attached to the House’s version of healthcare reform legislation that was voted out of the House this weekend.

The goal is to limit women’s access to reproductive medicine services, particularly abortions; this based on the concept that citizens of good conscience shouldn’t have their tax dollars used to fund activities they find morally repugnant.
At first blush, I was on the mild end of the wailing and gnashing spectrum myself...but having taken a day to mull the thing over, I’m starting to think that maybe we should take a look at the thinking behind this...and I’m also starting to think that, properly applied, Stupak’s logic deserves a more important place in our own vision of how a progressive government might work.

So let’s go back a moment and reconsider what Stupak wants: his religious beliefs are offended by the concept of abortion, and he is taking steps to ensure that the government is not using his taxpayer dollars to pay for the procedure.

This precedent is fascinating—and what I’m inviting you to do today is to consider, for a moment, what our government might look like if we take his logic and...extend it a bit.

“...In the game of life, the house edge is called Time. In whatever we do, Nature charges us for doing it in the currency of time...”

I always try to find common ground with those I oppose, and the most logical place to start would be to consider the fact that Stupak and I are both morally offended by the idea that we use taxpayer dollars to go around killing people.

So where do we differ?

For starters, I find it morally offensive that my taxpayer dollars are used, on a daily basis, to fund the actual killing of actual, living, people by my Government...so, Congressman Stupak, in the name of finding common ground, how about if the same day your Amendment goes into effect we also stop funding any military activities that might reasonably be expected to, as I hear people say, “stop a beating heart”, so as to prevent offending my religious sensibilities?

John Allen Muhammad, the so-called “Washington Sniper”, is scheduled to be executed today. Are you prepared to support legislation, Congressman Stupak, which will prevent his “post-term abortion” and the potential abortions of all those other human lives on Death Rows around this country if those state-sponsored abortions are as much of an affront to my religious beliefs as they should be to yours?

During the more or less four months worth of slow-walking and stalling that we have seen so far in this process 15,000 Americans have died...or, if you prefer, five 9/11s...simply because they have no health insurance—and unless your religion is a lot more bloodthirsty than mine, the abortions of 15,000 people because of the...what’s the word I’m looking for here...let’s see...could it be...sloth...of your colleagues should be an act as reprehensible as the greatest of blasphemies ever recorded in The Bible.

With that in mind, are you prepared to join me in cutting off the use of my taxpayer dollars to fund the salaries, the “public option” health care, and the office operations of those legislators who are behind these killings?

What else do we do that’s aborting lives on a daily basis that I’m sure Congressman Stupak would be glad to allow me, as a result of the offense to my conscience (and, presumably, his), to “negatively fund with extreme prejudice”?

There’s that Drug War, of course, and whatever we're doing in those secret prisons—and public ones—and subsidies for those who clear mountains and poison lands...not to mention the tax dollars I’ve been providing for a company who did electrical work that’s aborting soldiers.

Since you’re so proud of your pro-life credentials, are you ready to stand up with me and defend the principle that all human lives deserve to be protected, and that we have the right to withhold funding for all those activities that are morally repugnant...or are you just another one of those “enablers” who helped kill 15,000 people this past few months?

Howie P.S.: The Washblog post has this helpful poll to help decide what other immoral activities need to be de-funded, but you have to go back to the post for your vote to get counted. 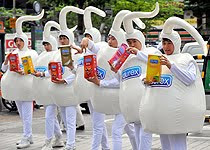 Posted by Howard Martin at 8:46 AM