"Seven McGinn Volunteers Get Jobs on the Transition" 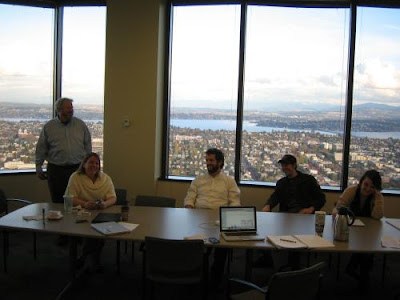 Seven of the people who worked more than 40 hours a week on the McGinn for Mayor campaign without pay—the core volunteer staff—now have paying jobs. They are Ainsley Close, Aaron Pickus, Elliott Day, Liz Birkholz, Jen Nance, April Thomas, and Derek Farmer. And instead of working out of campaign headquarters on Aurora Avenue North, they now work out of the transition office on the 60th floor of the Seattle Municipal Tower on Fifth Avenue. Instead of views of traffic screaming past, they now have views of south Seattle, Beacon Hill, Seward Park, Mercer Island, Lake Washington, the Bellevue skyline, etc.
A few minutes ago, McGinn gave me the tour. A small room with a few cubicles, another room that used to have cubicles that the staff decided to dismantle ("We work best when we're sitting in the same room and talking to each other," said Pickus), a corner office for the mayor-elect, and a conference room with many windows. "Oh, I'm locked out," McGinn said, trying the handle to his office. "I locked myself out of my office. I'm going to have to get a key." The new staffers were all sitting in the conference room, beaming, along with Becky Stanley (who's volunteering for the transition), and an employee of the Mercury Group.

The volunteer staff had a sense they were getting jobs as early as the weekend, assuming all went well, and after the pizza party on Monday night in McGinn's southeast Seattle office, they were told they'd be meeting at transition offices Tuesday morning. Rodney and Phil, two officers from SPD's Executive Protection Unit, were at that pizza party too; now they keep watch at the entrance to the transition office. "Pretty exciting--pretty exciting. I mean, all-volunteer effort," Phil said, gesturing down the hall toward the staffers. "That's pretty unheard of." Meanwhile, movers were bringing in furniture: a black leather couch and a gray recliner.

Job titles haven't been given out yet ("We're not big on titles," McGinn says), and in at least some cases paperwork hasn't been signed, but staffers have a rough sense of their roles on the transition staff. Ainsley Close is McGinn's right-hand person and works in his office ("Ainsley central role is just getting stuff done"); Aaron Pickus is coordinating media requests and the like; Jen Nance and April Thomas are handling McGinn's schedule and office-management tasks; Elliott Day, Derek Farmer, and Liz Birkholz are assisting with tasks related to public outreach. Birkholz was the project manager for all the policy papers the campaign produced and is an urban planner and landscape architect. Asked how it feels to go from volunteering for the campaign to having a paying job, Birkholz said, "It's life-changing. I've worn a lot of hats. This is a hat that takes me and the team that I've worked with for so long to an incredible new level."

"There are a lot of projects so everyone's going to be doing a lot," McGinn said, sitting in the conference room. We'd walked in on everyone else meeting, apparently—after a minute they all got up and left the conference room so they could continue meeting. "The pace of the transition is going to be intense. We're getting a little bit of a breather as we get the office set up, but the pace of the transition will be about the same as the pace of the campaign... so we can hit January 4 with an effective team." McGinn went on, "I expect we'll be adding to the transition staff as we go, but just as we get off the ground, I needed some people to take care of the immediate needs of things coming at me and be in a position to begin executing the transition."

As we were talking, Close walked in with two Subway sandwiches—one for her and one for her boss. Asked how she feels that she's now going to get paid for the sort of work she has been donating to McGinn for months and months, she said, "It feels pretty good. I haven't bought anything for a really long time. For a really long time. Except for food."

"Even that, right?" McGinn said.

"People were bringing food to the phone banks," McGinn said.

"I really think that's the only way Aaron survived," Close said, and then vanished to go work on something.

Asked about the new digs, two or three times the size of campaign headquarters during the general election, which were themselves orders of magnitude larger than campaign headquarters during the primary, McGinn said, "It's nice—it's really nice to have a central location and a conference room. There's a lot of people coming in and out—a lot of people from city government coming in an out, a lot of people from outside government coming in and out. You have to remember, even at Great City I was operating out of borrowed space and coffeeshops for several years. And the campaign office was so jampacked full of people--it's nice to have a nice functioning office space for the transition." He looked out the window. "It's beautiful."

"That's not Mercer Island," McGinn said. "You're looking at Seward Park. That small thing with all the trees on it-- that's Seward Park." As we walked out of the conference room, we passed his office door, which was open. Close's back was visible. "Oh look, someone got into my office," McGinn said.

Asked about how it feels to have a job, Farmer said, "I haven't signed papers yet, but I feel really good. It's gonna be a great place to work." Day said, "I'm just psyched to be helping Mike." Thomas said, "It feels excellent. I was getting kind of close to the edge there." Pickus said, "Working on the campaign was the best experience I've ever had and being a staff member during the transition—it was an honor to be asked. It's been a day and a half and I love doing it."

Howie P.S.: During the campaign I teased SLOGers that if Mallahan won they would have four years of trash-talkin' fun. They ended up with something way better: ACCESS!
Posted by Howard Martin at 8:04 PM