Seattle Mayoral race: the view from the insiders 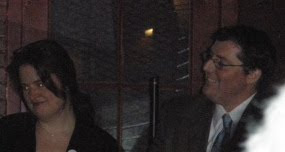 Neuman and Bennett at the PubliCola event

That's how Mike McGinn's late-campaign position switch on the tunnel replacement for the Alaskan Way Viaduct was described Monday night by a political insider. That insider: Charla Neuman, the spokeswoman for Joe Mallahan's campaign, who spent months trying to defeat McGinn, who will become Seattle's next mayor in January.
At a lively and revealing forum at Belltown's Del Rey sponsored by PubliCola, the McGinn and Mallahan campaign leaders spoke about the just-completed election that McGinn won by a very narrow margin.

Interestingly, the most trenchant and complimentary observations about the individual campaigns came from the opposite camps. Take the question about the viaduct tunnel. Just two weeks before the Nov. 3 election, McGinn shocked many by saying he would no longer oppose the controversial, $4.2 billion tunnel replacement. McGinn made his announcement immediately after a City Council vote to move forward with the project.

McGinn campaign guru Bill Broadhead said his candidate made his statement after what he said was a surprise council vote, and McGinn wanted to emphasize he wouldn't "honor agreements."

McGinn did flip, and he flipped his way into the mayor's office, Neuman said.

"It was a brilliant move, genius," said Neuman, who added she initially thought McGinn's "flip/flop" would hurt him. "For the first five minutes, I thought, 'yep, this is my Christmas present.' Five minutes later, I thought, 'oh, fill in the blank with your favorite four-letter word.' This could really work for him. Flip-flopping is an inside baseball game. And Mike McGinn is no John Kerry, he can articulate things very well."

Other highlights from the forum:

# McGinn, the environmentalist and attorney who was shunned by the business, labor and political elite, spent time trying to woo them after he won the Aug. 18 primary. "It was pretty cold out there," Broadhead said. After they were rebuffed, the McGinn strategy was to win "with no money and no endorsements," he joked.

# Some of the Mallahan camp were terrified about a possible write-in candidacy by state Sen. Ed Murray, who represents the liberal 43rd District in Seattle. "I think both teams, were concerned about Ed Murray's write-in," said Mallahan strategist Jason Bennett. "We worked really hard to try to prevent Ed from jumping in. That was our immediate strategy after the primary."

# Mallahan, the T-Mobile executive, became the establishment candidate and that ultimately didn't help him. Also, both Neuman and Bennett said Mallahan, a notoriously unreachable candidate, was in some respects shielded from the press by the campaign. Also, Mallahan simply wasn't as good on his feet as McGinn, and that hurt them. Mallahan fared very poorly in the televised debates - "Charla and I can't be held responsible for what Joe said in the debates," Bennett joked.

# Broadhead, in perhaps the most insightful commentary about the whole election, came to Mallahan's defense. But he added that Mallahan's campaign was likely doomed when incumbent Greg Nickels was defeated in the primary.

"I know we've all been in campaigns, and Charla's right, you take the whole package. But I think this guy (Mallahan) did speak from the heart," Broadhead said. "He was credible out there on the stump, and quite honestly he scared me as a candidate working the other side. I don't know, behind the scenes, kind of what happened, but candidates don't always say the perfect thing. But if you draw a tight box around them, what you're giving up is authenticity. And authenticity is the stock and trade of politics right now. And if people don't believe you, even if you're saying the right thing, it doesn't matter. I gotta tell you, I think Joe is a very authentic guy and he got into it for the right reasons. It's obviously something he thought about for a long time. From my perspective, the problem Joe had in this thing is he had a movie in his mind of what running for office would be like. He'd be the outsider, business, social justice guy and come in and clean up a corrupt system.
When Nickels lost the primary, the movie ended. He didn't know...it didn't feel right to him...it was a guy living a movie that wasn't right for him."

In a post-election confession session Monday night at a Belltown bar, the chief strategists from Joe Mallahan's failed mayoral campaign portrayed their candidate as overly altruistic and so unable to stay on message that they hid him from the public.
Speaking frankly to a room full of people at a forum sponsored by the political blog PubliCola, consultant Jason Bennett said he doubted anyone who watched the campaign could seriously suggest that Mallahan should have spent more time in the public eye.

"I would say it was part of our strategy, not to put him out there more often," he said.

Mallahan was uncomfortable promoting himself and thought out loud too much, said his campaign consultant, Charla Neuman.

On the winning side, Mike McGinn's campaign consultant, Bill Broadhead, said he regretted the tone of a controversial robo-call the campaign made alleging that Mallahan was aligned with the National Rifle Association and wanted it to be legal for people to take guns to parks.

And Broadhead revealed that after the primary, the campaign sought endorsements from labor and business groups, hoping that by winning the primary, they would have earned credibility among Seattle's power elite.

"It was pretty cold out there," Broadhead said, and added: "Then the strategy was to win with no money and no endorsements."

Later in the campaign, McGinn bashed Mallahan for taking donations from big labor and business.

Mallahan's consultants dished about the candidate's post-primary disappearance, when they were putting him through what the campaign called "mayor school," trying to get him up to speed on issues.

In the end, both campaigns said it came down to authenticity.

"We didn't let Joe be Joe," Neuman said.
Broadhead said the campaign never urged McGinn to shave his beard or speak through a spokesperson.

"If you draw a box around them, then what you give up is authenticity, and authenticity is the stock and trade of politics right now," he said.

Howie P.S.: I got there a little after six and the place was so packed I turned around and went back home.
Posted by Howard Martin at 11:34 PM