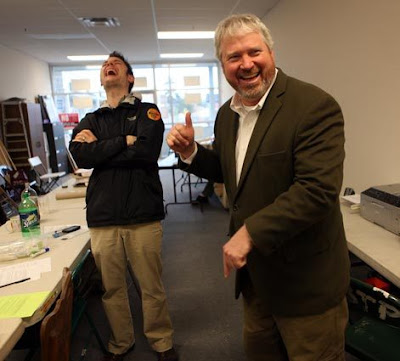 How did Mike McGinn apparently take Seattle City Hall? The mayoral candidate had a fleet of volunteers so devoted they deferred graduate school, borrowed money from their parents and spent hours contacting voters for McGinn.--Moments after the first returns were posted in the Seattle mayor's race, Mike McGinn's volunteer field director took the stage at the Capitol Hill party.

"It's still really, really close," Derek Farmer shouted. "We need everybody that has a phone to help."
What happened next has become campaign lore among McGinn supporters.

Partygoers set down their beers, accepted scripts, phone sheets and pay-as-you-go cellphones, and The War Room bar became an impromptu phone bank to contact voters who hadn't yet mailed ballots.

The campaign said it ended up delivering 200 ballots to the post office at midnight — a chunk of votes in a race that has McGinn and his opponent, Joe Mallahan, separated by 2,384 votes. It's a slim but seemingly insurmountable lead. To catch McGinn, Mallahan would have to take about 54 percent of the remaining votes.

By all accounts, McGinn was the underdog in the race. He was out-fundraised by more than 3-to-1, and he lacked big-name endorsements. He was opposed by Gov. Chris Gregoire, the chairman of the state Democratic Party, and most of the business and labor communities.

What he did have was a fleet of volunteers so devoted they deferred graduate school, borrowed money from their parents and spent hours contacting voters for McGinn.

The grass-roots campaign seemed to tap into Seattle's idealism, as McGinn spoke about listening to people and bringing them to consensus, stopping plans for a deep-bore tunnel to replace the Alaskan Way Viaduct and expanding light rail.

"I don't think it's just about Mike," said David Hiller, advocacy director of the Cascade Bicycle Club, which endorsed McGinn. "I hope that it sort of reinvigorates the grass-roots political movement."

McGinn, who quit his job as head of the nonprofit Great City to run for mayor, relied almost entirely on volunteers for his low-budget campaign. For three months, they campaigned out of his living room until he could afford cramped office space on Aurora Avenue.

McGinn himself traveled without an entourage. He spoke without notes, rode his bike to campaign events and gave reporters his cellphone number.

Mallahan, after putting $230,000 of his own money into his campaign, relied mainly on a staff of professionals.

Even if money had been no object, McGinn said, he wouldn't have hired a paid staff.

"You just need the passion and commitment of a lot of people to succeed," he said Saturday in his campaign office, where volunteers were still at work. "You can't get that from a few paid staffers."

Local political consultant Christian Sinderman said McGinn did a better job of defining himself for voters, and a volunteer-run campaign helped with that.

"One thing that a volunteer-driven campaign does help with is, it eliminates staff conflict and having too many cooks in the kitchen," Sinderman said. "You got a sense from Mallahan's campaign that there were a lot of people with spatulas."

Ballots are still being counted, and Mallahan has not conceded. Officials estimate about 80,000 ballots are left to tally countywide, which would mean about 30,000 in Seattle. King County Elections will release more vote totals Monday.

The Monday before Election Day, volunteers in McGinn's campaign office were using almost every available piece of furniture. They sat three to a couch and on folding chairs, using their cellphones to call undecided voters. It was hot and stuffy. Empty coffee cups and half-eaten loaves of bread were scattered on the tables. Bikes leaned against the walls.

Over the course of the campaign, McGinn volunteers said, they personally spoke to more than 13,000 voters on the phone.

Volunteer coordinator Sol Villarreal said it usually wasn't difficult to persuade Seattle voters to vote for McGinn. Ideologically, McGinn and Mallahan were similar. The fact that a volunteer cared enough to call was often enough.

But McGinn was more than just a populist.

Throughout the campaign, he relied heavily on polls to determine what resonated with voters. Early in the primary campaign, polls showed most voters opposed a deep-bore tunnel. He made the issue the center of his campaign, setting him apart from seven other candidates in the primary.

Later, he backed away from his strong stance when voters indicated they were worried he would be an obstructionist. When the Seattle City Council voted unanimously Oct. 19 to move ahead with the tunnel project, McGinn held a news conference to say he wouldn't stand in the way of the tunnel.

Among the wall decorations in the Aurora Avenue campaign office were a half-dozen color-coded, poster-sized maps of primary results. After the primary, the campaign went after parts of town Mayor Greg Nickels took, including Southeast Seattle.

They opened a campaign office on Othello and Martin Luther King Junior Way South and reached out to refugee and immigrant communities, who were swayed by McGinn's experience improving his own neighborhood in North Seattle.

In the end, McGinn doesn't think his position on the tunnel made a big difference.

"I think the voters weren't just deciding based on people's positions on the issues," he said. "I think they were making a decision based on who shared their values.

"When voters talked about my background within the Sierra Club and as a community person, somebody who rode my bicycle and was supporting light rail, who's talking about including a lot more people in decision-making, all of these showed my support of a vision of a city. I was going to be different from the way we've been doing (things) ... a city that really holds promise of being an innovative and creative and a fair place."
In the midst of organizing about 300 active campaign volunteers, Villarreal polished his résumé and got a job as a nurse's assistant. He starts later this month.

As he watched the returns last week, Villarreal said he would rather have a close race than a blowout because volunteers will know their work made a difference.

"It means our volunteers pushed us over the top," he said. "You can't pay anyone to do for you what a good volunteer can do for nothing."

Howie P.S.: As Mayor, Mike will have to work with lots of people who don't work for nothing. Let's hope he can work as well with them.
Posted by Howard Martin at 4:41 AM