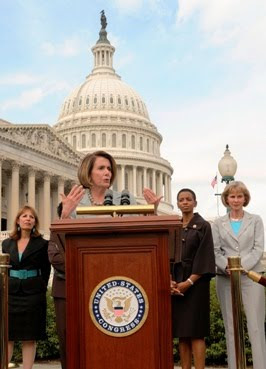 House Speaker Nancy Pelosi will be here early this afternoon for an event intended to remind us "how the groundbreaking health insurance reform legislation passed on Saturday by the US House of Representatives helps Seattle."

Which begs the question: Why Seattle?
The 7th Congressional District (that's us) is arguably the last place in the country that needs to brought on board with the idea that heath insurance reform is urgent and important. And our Congressman, Jim McDermott—his big problem with the current health insurance reform bill is that it isn't radical enough. He's been shouting about single-payer, since, well, forever.

So, again, why Seattle? Jay Inslee and Norm Dicks, two other Democratic congressmen from Washington who voted for the bill, have also been invited to hang out with Pelosi today. Perhaps the event is a way to implicitly ostracize congressman Brian Baird, the Democrat from Vancouver, Washington, who voted against the bill. But there are better ways to do that than not inviting him to a Seattle press conference.

I wonder: Is this part of some deal Pelosi struck with members of our delegation to keep them on board despite the limits on coverage for abortions that were placed in the bill at the last minute? "Vote for the bill, guys, and I will come out and explain to your constituents why we had to do something that infuriates all the pro-choice voters in your district..."
That's just speculation. But whatever the reason for her visit, it's certain that Pelosi will be doing some explaining on abortion funding at today's event.

UPDATE: Darcy Nothnagle, district director for McDermott, says the visit to Seattle was initially discussed weeks ago, but only confirmed yesterday.

Howie P.S.: On another front, the President and the Democratic party are facing push-back on issues of import to the LGBT community, "Americablog Launches Boycott of DNC." Publicola tells us "Jim McDermott (D-7), Jay Inslee (D-1), and Norm Dicks (D-6)—will be touring Swedish Hospital today and talking to hospital officials and the press about the legislation passed Saturday." I don't know if Nancy's plane will get in town before the Swedish gig, but if it does, she'll probably show up, too. And hey, how come Adam Smith can't be part of the hang?
Posted by Howard Martin at 11:26 AM