Voluntary furlough for Seattle Council? --"it’s time to wrap it (press conference) up." 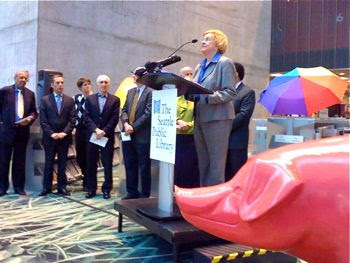 After accounting for projects saved from the guillotine, the Seattle City Council had an awkward moment at its press briefing on the 2010 budget when council budget chair Jean Godden trumpeted her sacrifice of 10 days pay—and the 10 days pay of her staff—as a voluntary two-week furlough. Standing next to a bubblegum sow of a piggy bank, Godden was making a particularly generous gesture in the downtown library, which barely got back its funding. But what about the other council members, asked Seattle Times reporter Emily Heffter—would they also return some of their salary?

“I would not want to put them on the spot like that,” Godden deflected, but if someone wanted to ask the council members, who were in a phalanx behind her, they could ask them. “I think she just asked them,” I said. Someone else shouted from the back. A long, very silent pause among the people reading and checking out books was broken when City Council Member Jan Drago stormed the podium, took the mic from Godden, and her voice echoed across the floor, “Council Members McIver and I are not taking a furlough, and I think it’s time to wrap it up.”
Indeed, it was probably time to finish. Council members, who make over $100,000 a year, can give back some of their salary, but they probably shouldn’t make their staffers—who make a fraction of that—find out they’re getting a pay cut by reading it in the paper. But if the council wants to bring it up, expect someone to ask the question. Right?

The meat of the press conference was about all the great stuff the council saved from the mayor’s clutches. Mayor Greg Nickels’s proposed budget would have maintained severe cuts to the library, but the council restored 12 branches of the Seattle library system to seven days a week and 60 hours a week. Nickels had proposed only six would go back to week-round service, many of the branches only staying open 35 hours a week. The council also provided $100,000 for homeless services for women, and $950,000 for three progressive anti-crime programs, Communities Uniting Rainier Beach (CURB), Get Off the Streets (GOTS), and Co-STAR, the Court Specialized Treatment and Access to Recovery Services.

"Every time we added something, we had to cut something," said Coucil Member Richard McIver. The council cut from the Office of Policy and Management—originally intended for the council and the mayor but usurped by Nickels—which will be folded in with the next mayor budget's with reduced staff. The council also cut two park rangers.

Posted by Howard Martin at 7:21 AM