"McGinn pulling away as late ballots come in" 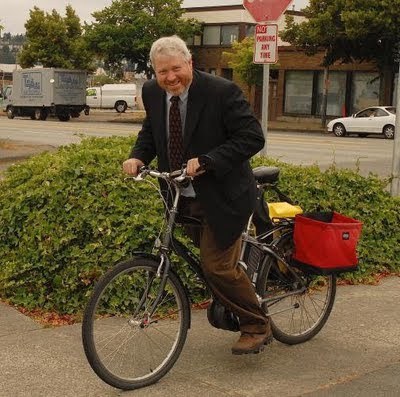 Joe Mallahan would now have to get about 54 percent of the remaining votes to catch up to McGinn.
"It'll be tough to overcome," said Charla Neuman, Mallahan's campaign spokeswoman. She said Mallahan would spend the weekend evaluating the race. "It's still within the realm of possibility," she said.

McGinn was at home Friday night and could not be reached for comment. He said late Friday afternoon that he expected to win.

Just days before the election, Mallahan, a 47-year-old T-Mobile vice president, appeared poised to win. He was leading in the polls, had raised more than three times as much money as McGinn, and was supported by the city's political and civic leaders.

But McGinn's volunteer-run campaign had held 25 town-hall meetings around Seattle and focused on gaining votes in Southeast Seattle, where Mayor Greg Nickels took most of the votes in the primary. McGinn picked up support from a number of immigrant communities there.

McGinn, 49, is an attorney and former Sierra Club leader who quit his job at a downtown law firm two years ago to run the nonprofit he started, Great City. He rode his bike to most campaign events and passed out "Mike bikes" stickers featuring his helmet-clad head.

McGinn spent just under $3,000 a month on overhead costs, relying on volunteers, many working full time. Mallahan spent close to $35,000 a month, including about $24,000 in salaries for his staff.

Mallahan had support from state leaders, including Gov. Chris Gregoire and leading state legislators, the chairman of the Washington State Democrats, Seattle's business community, most major unions, and police and firefighters.

Neither candidate has run for office before. McGinn raised $216,123. Mallahan raised $721,620, according to the latest disclosure reports.

McGinn said Friday he felt confident after Election Night returns showed him in the lead by about 900 votes. He had expected he might be behind in early returns, he said.

As the votes continued to be tallied, his internal campaign analysis showed ballots of older voters more likely to support Mallahan were counted first, meaning the remaining votes would likely trend in McGinn's direction.

"In the primary we saw that our lead expanded with the late ballots," he said. "I think we're seeing that."

The biggest issue in the race was a planned $4.2 billion deep-bore tunnel project to replace the Alaskan Way Viaduct.

For most of his campaign, McGinn vowed to try to stop the tunnel, but two weeks before the election, he announced he would not. He said he was forced to change his position by an Oct. 19 vote of the Seattle City Council to move forward with the tunnel project.

Mallahan seized on the reversal, calling it a "flip-flop" and running an attack ad on television.

On Thursday, Mallahan said he had expected to see votes trend in his direction as later voters were influenced by McGinn's announcement about the tunnel.

McGinn said he thinks voters understood his nuanced position on the tunnel. "I think my opponent wanted to spin it in one way or another," he said. "I think Seattle voters are pretty smart."
King County Elections will release more vote totals Monday. Officials estimate about 80,000 ballots are left to tally countywide, which would mean about 30,000 in Seattle.

McGinn...now leads by 2,384 votes - well outside the margin for a mandatory recount, according to the latest results posted Friday evening.

Posted by Howard Martin at 4:28 AM