UPDATE: John Avarosis points out that MSNBC operates much differently than FAUX:

The very fact that Rachel calls her show "liberal" is far more than FOX has ever admitted about its network being conservative. That's the difference - Rachel and Keith are honest and up front about where they're coming from. FOX is not.

But it's far more than that.

1. Rachel and Keith don't routinely lie.
2. They're not bat-shit crazy.
3. Rachel's and Keith's liberal views are not echoed in MSNBC's news coverage. On FOX, the "news" hosts push the same conservative talking points as the "opinion" hosts.
4. MSNBC doesn't just have three hours of liberal programming in the evening. The NYT fails to tells its readers that MSNBC also has three hours of conservative programming in the morning, with former arch-Republican congressman Joe Scarborough. Kind of relevant, since it means that MSNBC splits its partisan programming 50-50. FOX has no liberal hosts, period, and when they did have one, for one hour (Alan Colmes), he had to share his show with an outspoken conservative who wouldn't shut up. 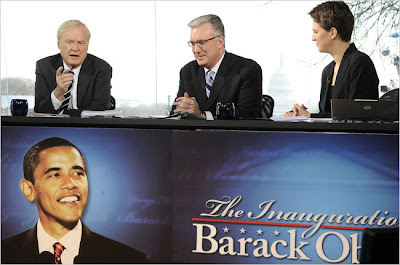 If President Obama happened to glance at “The Rachel Maddow Show” last Monday, he might have winced.

Ms. Maddow pretended to celebrate the passage of a health care overhaul bill in the House, calling it “potentially a huge generational win for the Democratic Party” — but then halted the triumphant music and called it an “electoral defeat.”

The Stupak amendment, she said, was “the biggest restriction on abortion rights in a generation.” Then she wondered aloud about the consequences for Democrats “if they don’t get women or anybody who’s pro-choice to ever vote for them again.” She returned to the subject the next four evenings in a row.

This is how it looks to have a television network pressuring President Obama from the left.

While much attention has been paid to the feud between the Fox News Channel and the White House, the Obama administration is now facing criticism of a different sort from Ms. Maddow, Keith Olbermann and other progressive hosts on MSNBC, who are using their nightly news-and-views-casts to measure what she calls “the distance between Obama’s rhetoric and his actions.”

While they may agree with much of what Mr. Obama says, they have pressed him to keep his campaign promises about health care, civil liberties and other issues.

“I don’t think our audience is looking for unequivocal ‘rah-rah,’ ” said Ms. Maddow, who calls herself a liberal but not a Democrat.

The spectacle of Democrats sniping at one another is not new, but having a TV home for it is. MSNBC — sometimes critically called the “home team” for supporters of Mr. Obama — has even hit upon the theme with a promotional tagline, “pushing back on the president,” in commercials for “Hardball,” Chris Matthews’s political hour.

But is it good business? MSNBC is projected to take in $365 million in revenue this year, roughly the same amount as last year, when the presidential election bolstered its bottom line. Three years ago, before making a left turn, it had revenue of about $270 million a year. MSNBC’s parent company, NBC Universal, is on the verge of being spun out of General Electric in a deal that would make Comcast its controlling entity.

Gary Carr, the executive director of national broadcast for the media buying agency TargetCast, said the opinions matter less than the ratings they earn. With cable’s prime-time opinion shows, “you’re reaching a lot of people,” he said.

It is certainly reaching the White House. Anita Dunn, the departing White House communications director, calls Mr. Olbermann and Ms. Maddow “progressive but not partisan,” and in doing so, distinguishes them from Fox News, which she considers a political opponent. The MSNBC hosts, she said in an e-mail message last month, “often take issues with the administration’s positions or tactics and are never shy about letting their viewers know when they disagree.”

Ms. Maddow said that apart from an off-the-record meeting between Mr. Obama and commentators that she attended last month, she has heard little from the White House.

MSNBC’s liberal points of view have made the channel an occasional thorn in the side of G.E., but the channel has also fostered a diversity of opinions that people like Adam Green, the co-founder of the Progressive Campaign Change Committee, say were lacking in the past.

“There’s been a huge market void for a long time,” Mr. Green said. Speaking of the MSNBC hosts, he said, “They are creating an environment where progressive thinkers and activists can thrive.”

She paused and added, “Maybe that would have helped us make better policy decisions in the country in the past.”

Sitting down to a midnight dinner in the East Village after her program on a recent Thursday, Ms. Maddow had shed her suit for a T-shirt. Four minutes in, a fan asked for an autograph. “You’re doing great work,” he said while she signed her name.

MSNBC’s political tilt — and Ms. Maddow’s ascension to one of the most influential positions in progressive America — are still starkly new phenomena. A Rhodes scholar with liberal radio roots, Ms. Maddow started to host MSNBC’s 9 p.m. hour on the eve of last year’s presidential election, at a time when MSNBC was wrestling with its political identity. New viewers materialized overnight, peaking at nearly two million a night in October 2008. Without an election to drive viewership, her program averaged 880,000 viewers last month.

As her objections to the Stupak amendment (so named for Representative Bart Stupak, Democrat of Michigan) indicate, much of her work these days involves the Democratic health care overhaul. Ms. Maddow, Mr. Olbermann and Ed Schultz, the channel’s 6 p.m. host, formerly of Air America, have all exhorted Democrats to keep the public option.

Mr. Schultz started a broadcast last month by asking, “Where is the president? I think it’s time to be clear — crystal clear. What does Barack Obama want when it comes to health care in this country? What does he want in the bill?”

Topics often tackled on Ms. Maddow’s program include the relationship between the United States military and politics (something she is writing a book about) and the repeal of the “Don’t ask, don’t tell” policy toward gays in the military.

Representatives for two gay members of the military, Dan Choi and Victor Fehrenbach, approached Ms. Maddow’s producers about coming out on her show, in March and May respectively. Introducing Mr. Fehrenbach, Ms. Maddow intoned that he was about to be fired “in the shadow of these political promises left unfulfilled.”

Other MSNBC hosts have also objected to some of the president’s policy decisions. In April, Mr. Olbermann, the channel’s best-known voice, urged Mr. Obama to hold members of the Bush administration accountable for what he called the “torture of prisoners.”

“Prosecute, Mr. President,” he said. “Even if you get not one conviction, you will still have accomplished good for generations unborn.”

Ms. Maddow, however, contrasts her channel’s advocacy with the activism conducted, she says, by others on cable news. “We’re articulating liberal viewpoints,” she said at dinner, “but we’re not saying ‘Call your congressman, show up at this rally!’ ”

On her show, she has criticized Fox News for seeming to promote tea party rallies denouncing the administration this year, and the Fox host Glenn Beck, who has promoted a “9/12 Project,” intended, he says, to restore the values that Americans sensed immediately after the Sept. 11 terrorist attacks.

Howie P.S.: I guess MSNBC really doesn't want to be the lefty's FAUX; it says so in The New York Times. The article is wrong about one thing though: Ed Schultz has never been part of Air America and if you listen to his show today, I'll bet you ten bucks he says so.
Posted by Howard Martin at 6:38 AM