Pelosi in Seattle: "The Amendment Was Necessary." (with video) 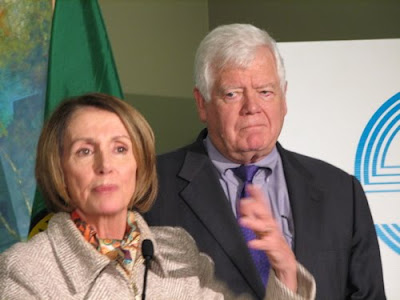 So said House Speaker Nancy Pelosi, talking this afternoon in Seattle about the controversial abortion amendment that was added at the last minute to the House health insurance reform bill.
Which is not to say she likes that the amendment had to be added.

"I myself do not really think this issue should be part of this legislation," Pelosi said, flanked by two Washington congressmen, Jim McDermott and Jay Inslee. "But others thought differently... I voted against it, as did all of the members of the leadership and the chairs of the committees of jurisdiction."

McDermott and Inslee also voted against the amendment, which passed 240 to 194.

The amendment vote had to be allowed, Pelosi said, because Republicans were determined to force the issue one way or another, and letting them do it via the amendment process was the best way to avoid derailing the entire health insurance reform effort:

The major parts of this bill do so much to provide quality health care, and bring many more people into the loop. And, by the way, under this legislation, being a woman is no longer a pre-existing medical condition... The provision that you're talking about would have been in the bill one way or another. The Republicans would have put it as a motion to recommit—not to get too much into this—we thought it was better to have it as an amendment that could be voted up or down, rather than a provision in the motion to recommit, which would take down the whole bill.

That's a pretty technical answer, but again, what Pelosi was saying is that the amendment process was the least bad way she could think of to contain this explosive issue.

Will the Senate be able to strip about the amendment and its limits on abortion funding, now that the bill is in its hands?

Posted by Howard Martin at 9:07 PM