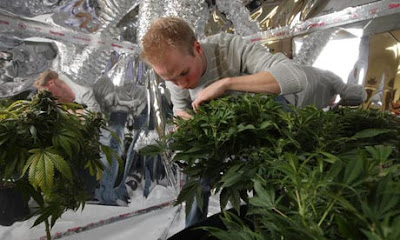 Nick Tennant in the grow room at Detroit's Cannabis College.

It goes without saying that there's no smoking in class. But there is a good deal of sniffing of leaves, discussion of the finer points of inhaling and debate over which plant gives the biggest hit.
Welcome to Detroit's cannabis college, recently opened with courses on how to grow marijuana – and harvest, cook and sell it too – after Michigan legalised the drug as a medicine.

Students get instruction from horticulturalists, doctors and lawyers as well as hands-on experience cultivating plants and guidance on how to protect their stash from the criminal element.

"Growing pot by chucking seeds in the garden is fine for the recreational industry," says the college co-founder, Nick Tennant, whose wholesome and youthful appearance, including acne-covered cheeks, startles some of the more ragged-looking students. "But when we're using this from a medicinal standpoint, you really need to document your strains and your genetics. The horticultural process is very complex. If you want to do it right you're going to need to learn. There's a lot of money in this if you do it right."

With more than 1,000 medical marijuana certificates issued each month in Michigan for users and growers to sell to them, there is demand for places at MedGrow Cannabis College, located in a small office block.

Among the first students paying $475 (£285) for six evening classes are people reliant on marijuana for pain relief and those who help them, including a clergyman who runs an Aids clinic.

Then there are young men such as Ryan Hasbany, a 20-year-old business student. He's still a year too young to get a grower's licence but he wants to learn the trade. "My father is a family practice doctor and he is issuing medical marijuana cards so I know there are a lot of people getting them. It could turn into a very lucrative business. The street prices are ridiculously high," he says of medical grade marijuana, which sells at $250 (£150) an ounce in Michigan. "There's Harvard economists who say this is what we need to bring the economy back."

Hasbany has no hesitation in admitting that he might be in a good position to judge the quality of what he grows. "I smoke it. In my high school graduating class, I'd say 25% of them were smoking it," he said.

Michigan became the 14th state to legalise medicinal marijuana this year after about two-thirds of voters supported the measure in a referendum. The move reflects growing acceptance of the drug in large parts of the country. In the past week, the US's first marijuana cafe opened in Oregon and Colorado ordered cannabis sales subject to tax.

The path was carved by California, where permission to buy marijuana requires little more than telling a sympathetic doctor it would make you feel better. Attitudes are changing in Washington too, where the Obama administration has told the FBI and other federal agencies to adhere to state marijuana laws in deciding who to arrest.

For all that, there is still hesitation over identification with what is now a legal industry in Michigan.

The first class of the evening at cannabis college is led by a physician who wants to be known only as Dr Powell. "Don't mention my first name. It'll make it harder for them to identify me," he says.

Powell explains to the students the range of conditions that permit him to issue a medical marijuana certificate, from cancer and Aids to a broad category of severe chronic pain. "If someone's had back surgery or a gunshot wound," says Powell.

There are questions. "Can I get it for gout?" asks a student. Powell thinks it unlikely.

The doctor says he is not concerned about addiction but regular cannabis users should find an alternative to smoking. That's why the course also includes a cookery class with recipes as varied as hash cakes and marijuana sushi.

The horticulture lecturer is even more wary than the doctor about being identified. "They might ask how I know how to grow all this stuff," he says. "I've been doing it for rather longer than it's been legal."

He, like many of those who lecture at Cannabis College, is also a consumer because of severe injury in a bad sporting accident. Tennant obtained a medical marijuana certificate to deal with a stomach condition that causes nausea. It is what brought out his acne.

The horticulturalist pulls open a couple of large white doors that act as an entire wall at the front of the classroom. Bright white light streams through the cracks and across the classroom to reveal a den of silver-lined walls, air conditioning ducts, fans and intense lights. At the heart sit a handful of plants – some of them bushes really.

The teacher runs through soil versus hydroponics, lights (red and blue better than LED), pruning (pluck, don't cut) and the intricacies of cloning. There's an explanation of ozone generating devices to cover the smell. "You might not want the neighbours to know. You don't want them raiding your house for your supply," he says.

Pasted to the wall is a chart of the labyrinth of marijuana species, their effect on different diseases and their particular tastes.
The horticulturist explains that there's money to be made from the trade in medicinal marijuana but growers must tailor the plant to the customer's need. "There's pot that makes you not shut up for five hours. There's pot where you sit on the couch and drool for five hours. That's not what you need if you're going to hold down a job. There's thousands of people getting patient cards and they all have needs. If you can work out how to meet those individual needs you're gonna get rich," he says.

Posted by Howard Martin at 9:46 AM