"Bloomberg Cracks Down on OWS" 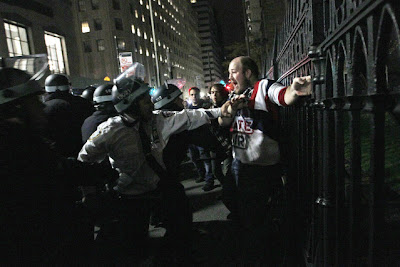 I see that Mayor Bloomberg cleared Zuccotti Park in the middle of the night. They used the excuse that the park had become unsanitary and needed to be cleaned. And now they won't allow any tents, tarps, or sleeping bags. About seventy people were arrested when they either refused to leave or were swept up in the police sweep. David Atkins was awake and covered it as it happened. According to him:

The NYPD cleared Zucotti Park early this morning, using pepper spray, LRAD sonic devices, batons, and ultimately bulldozers. As I write this at 1:30AM pacific time, the situation is still fluid, with protesters gathering and marching in various places around the city as the police corral crowds wherever they appear.

Watching it unfold has had the same surreal feel as watching the early days of Tahrir Square. As big as the story of the clearing of the park is, one of the interesting side stories is also that all the major news networks, cable and otherwise, were silent. They were showing no live video from New York. Only Raw Story had a live stream, still ongoing as of this writing. And as with Egypt, by far the best way to learn about events happening on the ground was via Twitter.

He collected some interesting information via the Twitter Machine, including that they threw the entire OWS library in a dumpster and that they shut down the airspace so that news agencies could not provide aerial coverage. Also, the Brooklyn Bridge was closed during the operation.

Bloomberg has broken more laws today by igonring the court order to allow the protesters to return than the arrested protesters have.

Posted by Howard Martin at 5:42 AM