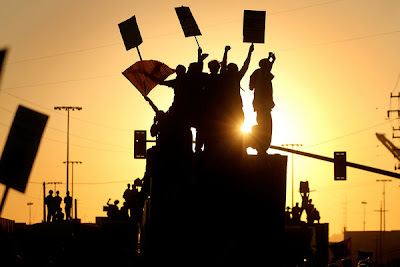 "Protesters severely disrupted operations at the Port of Oakland, Calif., earlier this month."

Unions and Occupy Wall Street protesters will be joining forces next week for a “day of action” to pressure lawmakers on jobs.

The AFL-CIO, the Service Employees International Union and the Laborers’ International Union of North America will partner with Occupy Wall Street for “We are the 99 percent” rallies on Thursday. Liberal groups like MoveOn.org and the American Dream Movement plan to participate. MORE...

Describes the results of a recently conducted survey on the "Occupy Movement" in U.S. local governments. The survey covered relations with the protesters, concerns, management approaches, permit requirements, location of protesters, encampments, and other descriptive information. Some respondents offered advice based on their experience managing the protests. MORE...

OCCUPY WALL STREET and its allied movements around the country are more than a walk in the park. They are most likely the start of a new era in America. Historians have noted that American politics moves in long swings. We are at the end of the 30-year Reagan era, a period that has culminated in soaring income for the top 1 percent and crushing unemployment or income stagnation for much of the rest. The overarching challenge of the coming years is to restore prosperity and power for the 99 percent. MORE...

Dan Siegel, a civil rights attorney and one of Oakland's most active and vocal police critics, said the city should have done more to work with campers before sending in police. MORE...

No sooner had the panel finished opening remarks last night than a woman scampered up onto stage and yelled, "Mic check!" It was an orchestrated effort by several dozen activists to use the People's Mic to interrupt a forum at Town Hall—a forum in favor of Occupy Wall Street, featuring three wonks and three activists from Occupy Seattle. Their stunt replaced what was supposed to be an informed discussion of the movement with an uninformative, shout-a-thon about process that consumed most of the evening. They booed opinions they disagreed with and drove supporters out of the building.

"I walked in supportive and left unsupportive," said 69-year-old Mary Ann, who declined to provide her last name. "I’m turned off by the negative shouts, repetition, and all I can think about is a cult. And I believe in every one of their damn principles."

Paula and Brian King also headed for the door early. "It was frustrating to listen to people shouting and interrupting," lamented Paula. Brian added, "We are leaving because they are looking inward at themselves and their eccentric process rather than reaching out to people." MORE...

As city officials around the country move to disband Occupy Wall Street encampments amid growing concerns over health and public safety, protesters have begun to erect more tents on college campuses.

“We are trying to get mass numbers of students out,” said Natalia Abrams, 31, a graduate of the University of California, Los Angeles, and an organizer with Occupy Colleges, a national group coordinating college-based protesters.

Though only a handful of colleges have encampments, tents went up last week at Harvard in Cambridge, Mass., and here at the University of California, Berkeley. Additionally, protesters in California have vowed to occupy dozens of other campuses in the coming days.

Last Wednesday at Berkeley, about 3,000 people gathered on Sproul Plaza to protest tuition increases, and many then set up a camp. Demonstrators linked arms to protect their tents, but police officers broke through and took down more than a dozen tents, arresting about 40 protesters.

University officials said they had watched city governments struggle to deal with expanding campsites and decided to take a stricter line: no tents, no sleeping, period.

“The present struggles with entrenched encampments in Oakland, San Francisco and New York City led us to conclude that we must uphold our policy,” the university chancellor, Robert J. Birgeneau, said in a statement.

“Our experience with these encampments is that they are never temporary,” said Claire Holmes, a university spokeswoman. “We’ve had a long-term encampment at People’s Park for 43 years.” MORE...

Councilmember Nick Licata has introduced a resolution, offering support to the Occupy Seattle protesters--and City Council is getting behind it.

The resolution essentially does what the protesters at Westlake have not--makes clear the goals and mission of the Occupy movement--and includes provisions for changing legislature in favor of economonically-strained citizens, as well as mandating that the City look into move their banking away from Wells Fargo, and toward a community bank or credit union. Now, the resolution is being backed by 7 out of 9 City Councilmembers, which makes it likely to pass when it's put up for a vote on October 31.

Councilmembers Sally Bagshaw, Mike O'Brien have both blogged about the issue, while Jean Godden has added language to the resolution to emphasize the special needs of women and people of color, including reserving money for social services.

Rather than simply declaring their support and walking away, this move by the City Council would make active changes to address the concerns of the Occupy movement, including unequal power and wealth distribution, and policies which give wealthy individuals and corporations more rights and opportunities. The resolution also includes provisions like those which make it difficult for contractors with exceptionally high-paid executives from submitting bids to the city (due to language regarding the ratio of laborers' pay to executive pay), and a city-wide income tax, to help possibly balance out the current regressive sales tax, which is disproportionately costly for lower and middle class citizens.

So far, there's been no word from the Mayor regarding this resolution--though, with the amount of vitriol turned in his direction from frustrated protesters, one can only imagine that he'll get behind it, if only to preserve what political future he may have left.

If you support this provision, call or email your City Council representative and let them know that you'd like them to pass it in the coming weeks. If you've never attended a single protest, do this one thing.