Dorli Rainey in Seattle:"We are losing our freedoms every second we stand around and do nothing." 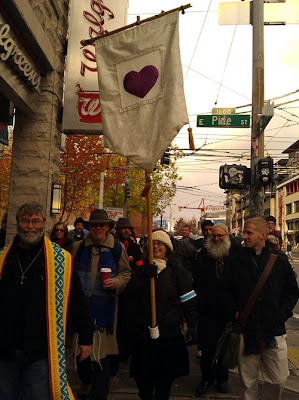 In front of the municipal tower, two security guard concierges politely directed protesters to their destination—SPD headquarters and the department's Office of Professional Accountability—where fresh-eyed 84-year-old activist Dorli Rainey waited, surrounded by members of the press, eager to talk about the Occupy movement and police accountability.

Rainey said she has no plans to file a complaint with SPD's Office of Professional Accountability (OPA) for being pepper sprayed on Tuesday. Still, she'd like to see SPD pay for how they've treated protesters. “I want their budget cut," she said. "They need to clean house. Get rid of the poisons. [That pepper spray] was big, like a fountain.”

And she doesn't regret blocking the street during Tuesday's protest. "I’d do it again. And if it happens again, it happens... We are losing our freedoms every second we stand around and do nothing.”

More photos and interviews after the jump. MORE...

Posted by Howard Martin at 5:07 PM