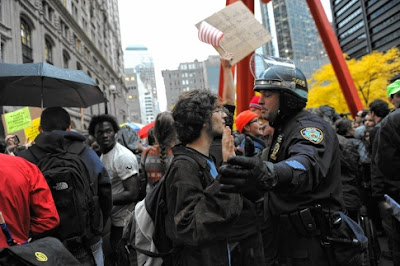 Ironically enough, Mayor Bloomberg’s early-morning eviction of the Zuccotti Park occupiers early Tuesday and Justice Michael Stallman’s endorsement later that day of that ban on full-time occupation both play into the hands of the embattled occupiers — thus making this a good moment to step back and see some simple truths about the city’s deeply flawed response to the young movement in its midst. MORE...

Howie P.S.: As my grandmother used to say (translated from her Yiddish): "From your lips to God's ears."
Posted by Howard Martin at 7:11 AM