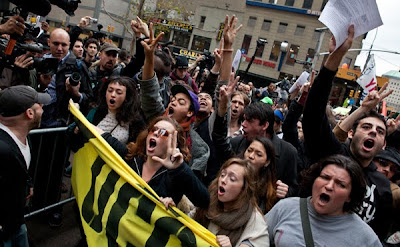 Mayor Michael R. Bloomberg on Tuesday defended his decision to clear the park in Lower Manhattan that was the birthplace of the Occupy Wall Street movement, saying “health and safety conditions became intolerable” in the park where the protesters had camped out for nearly two months. MORE...

Howie P.S. I tried to find something in the story that relates to the headline, but I couldn't.
Posted by Howard Martin at 1:33 PM

Email ThisBlogThis!Share to TwitterShare to FacebookShare to Pinterest
Labels: ows