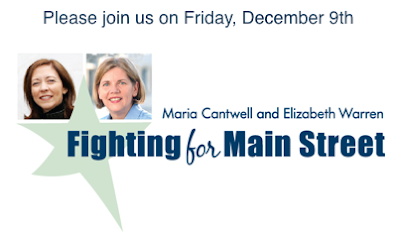 Sen. Maria Cantwell (D-Wash.) and Massachusetts Senate candidate Elizabeth Warren, both known for fighting the excesses of Wall Street, are teaming up for joint fundraising events on Dec. 9 in Seattle.

According to the Seattle Times, "Rose Kapolczynski, Cantwell's political consultant, called the Cantwell-Warren pairing 'a natural fit' given their work on financial regulation. Kapolczynski said more than 200 people are expected to attend the reception while 'a few dozen' are booked for the luncheon."

Indeed, in his new book Confidence Men, Ron Suskind wrote that Warren and Cantwell had "been right, and right early, about the way America's financial system was drifting toward crisis." They, along with a few other women, "had been shooed away and shouted down by the men, both those manning Wall Street and those atop Washington's regulatory or economic policy posts, who quietly asserted that high finance might be the final mountaintop stronghold of 'man’s work.'"

Posted by Howard Martin at 3:12 PM