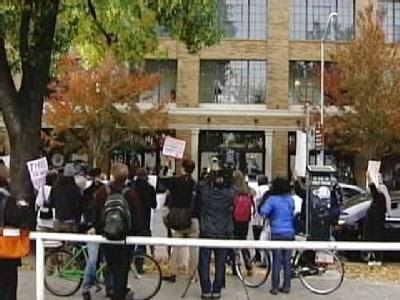 The Sacramento City Attorney’s office today dismissed nine misdemeanor cases of protesters arrested at the Occupy Sacramento encampment at Cesar Chavez Park – and pro bono lawyers said they expected dozens of cases to be dismissed over the next week.

Another seven people are scheduled to have their charges dismissed Friday. Another nine, including anti-war mom Cindy Sheehan, will have charges dropped early next week.

In all, charges are expected to be dismissed or not filed against 40 individuals, the City has indicated to Occupy Sacramento lawyers. The Sacramento Police have made 84 arrests at the park since October 6.
(SNIP)
As the police crackdowns continue, an investigative news piece in the examiner.com on November 15 revealed that the repression of the Occupy movement was apparently aided by officials from Homeland Security and other federal law enforcement agencies (http://www.examiner.com/top-news-in-minneapolis/were-occupy-crackdowns-aided-by-federal-law-enforcement-agencies).

“Over the past ten days, more than a dozen cities have moved to evict ‘Occupy’ protesters from city parks and other public spaces,” wrote Rick Ellis, Minneapolis Top News Examiner. “As was the case in last night’s move in New York City, each of the police actions shares a number of characteristics. And according to one Justice official, each of those actions was coordinated with help from Homeland Security, the FBI and other federal police agencies.”

“The official, who spoke on background to me late Monday evening, said that while local police agencies had received tactical and planning advice from national agencies, the ultimate decision on how each jurisdiction handles the Occupy protests ultimately rests with local law enforcement,” according to Ellis.

“According to this official, in several recent conference calls and briefings, local police agencies were advised to seek a legal reason to evict residents of tent cities, focusing on zoning laws and existing curfew rules. Agencies were also advised to demonstrate a massive show of police force, including large numbers in riot gear. In particular, the FBI reportedly advised on press relations, with one presentation suggesting that any moves to evict protesters be coordinated for a time when the press was the least likely to be present,” said Ellis. MORE...

Occupy Sacramento said this afternoon that it will protest in front of Gov. Jerry Brown's Sacramento loft on Saturday.

But the Democratic governor is unlikely to be there: He spends many weekends at his Oakland home.

Cres Vellucci, a spokesman for Occupy Sacramento, said Brown's presence doesn't matter. The protest, he said, is "symbolic of the movement."

Occupy Sacramento said in a release that protesters and labor advocates will rally at Cesar Chavez Park before leading a "noisy march right to the front door of Gov. Jerry Brown's Sacramento home."

Brown has kept quiet about the Occupy Wall Street movement and recent student protests in California.

Vellucci said protesters "don't have a lot of faith in politicians, generally." They are specifically critical of Brown because they think he has not aggressively enough pursued tax increases on the wealthiest Californians, even as the state reduces services.

Posted by Howard Martin at 5:57 PM