GuardianUK: "Occupy and the militarisation of policing protest" 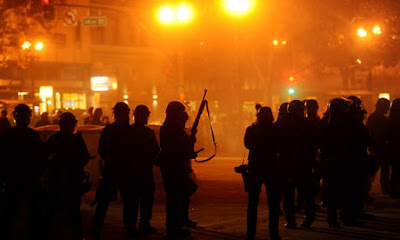 The excessive force exhibited at some Occupy locations – the use of tear gas; alleged use of rubber bullets and reported presence of sonic weapons – is becoming a pattern. A protester in California, who wished to remain anonymous, recalls experience of a long range acoustic device (LRAD) in Oakland last week:

"I had been tear gassed three times, so when I first saw the sound cannon, I panicked. When the cannon went off, I felt it pulse through me and I instantly felt dizzy and nauseated. At one point, I fell over. I noticed others around me had fallen over as well and some vomited."

Such anti-riot technologies were characterised as inhumane by human rights observers when they were used to subdue unarmed, peaceful protesters during civil unrest in Tbilisi, Georgia, in 2007. They have no place in a democratic country. They may be characterised by authorities as "non-lethal", but they can all too easily become lethal if misused by reckless law enforcement agents. The Occupy movement is explicitly a nonviolent exercise of first amendment rights, yet its policing bears all the hallmarks of a chilling militarisation of law enforcement in the United States. MORE...

Howie P.S.: It has been noted by others that the reaction to the Frat Boy Riot in Pennsylvania by law enforcement was quite different than the reaction to the non-violent Occupy activities and the recent protest @Sproul Hall in Berkeley.
Posted by Howard Martin at 5:27 AM